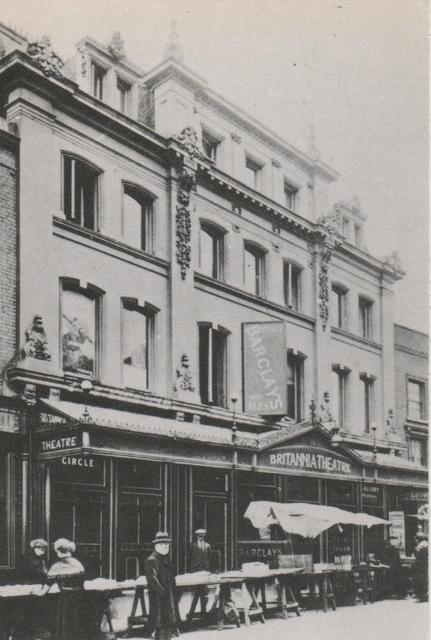 The Royal Britannia Saloon, was opened at the rear of the Britannia Tavern in 1841. Located in the northeast London district of Hoxton, it was a typical music hall of its time, and became very popular.

It was re-built in 1858 to the plans of architects Finch Hill & Paraire. Opening in November 1858 as the Britannia Theatre, the original capacity (including standing) was for 3,923. This was later reduced for safety reasons by the local authority, to allow only 2,972 seats, which were provided for 330 in the orchesta stalls, 730 in the pit stall, 460 in the dress circle, 1,380 in the gallery and 72 in the six boxes. The proscenium was 34 feet wide and the stage was 76 feet wide x 60 feet deep. Charles Dickens attended the theatre, and he remarked on ‘its magnificent interior and the ease with which all classes of society mixed’.

Owned and operated from the beginning by Samuel Lane and his wife Sarah Haycroft Lane, Pantomimes were very popular, and ran each year from Christmas until Easter. At Easter 1903, it was taken over by Thomas Barrasford, who owned many music halls and variety theatres around the country, however he soon passed it over to the MacNaghten Vaudeville Circuit, and by 1908 ‘Penny Picture Matinees’ were being held.

In October 1911, a permanent projection box was built into the theatre to allow for the screening of films as part of the programme. From 20th October 1913 until 30th November 1914, it was used exclusively as a cinema, before returning back to live theatre use. From November 1923, it was taken over by the Biocolour Picture Theatres chain and became a full time cinema. Gaumont British Theatres took over the Biocolour chain in November 1926, and they operated the Britannia Theatre successfully from then onwards. In 1934, Gaumont British proposed to make a film about the Britannia Music Hall, which was to star Jessie Matthews.

Disaster struck in 1940, when the Britannia Theatre was totally destroyed by a German bomb. Today, the site of the theatre is marked by a plaque, donated by the Borough of Hackney, which is on the wall of the current building, a block of modern flats.

Some history and photographs of the Britannia Theatre here:
http://www.arthurlloyd.co.uk/Britannia.htm
A more detailed history and some more vintage photographs here:
View link