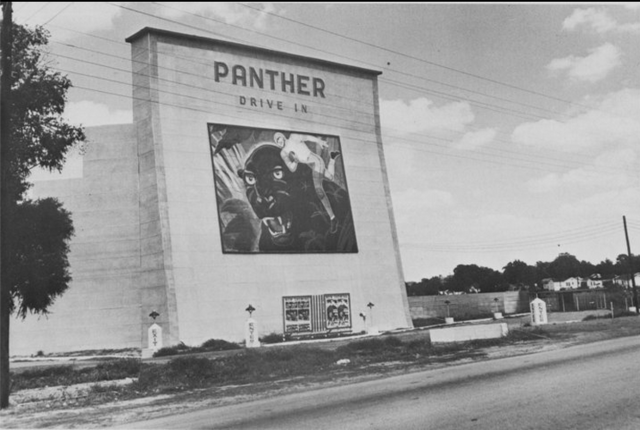 Located on the corner of E. Denman Avenue and S. Timberland Drive (Business US 59), the panther was also the name of the high school mascot. The Panther Drive-In was opened on November 1, 1953 and was the principle Lufkin drive-in theater during the 1950’s and 1960’s. Operating into the early-1970’s, the location is now a shopping center near the center of the city.

Well, in 1956 it parked 300 cars so it must have enlarged since above it is listed at 500 cars! It was owned by Phil Isley theatres.

Cars were bigger in the 50,sso they could not hold as many,HaHa.

Oh come on,you did this to me on some Drive-in about holding BOATS! LOL. I hope to be adding TRI CITY DRIVE in, MIDWAY DRIVE in and SKYLAND ARTS CINEMA this weekend if Nick is able to get them on CT.Nick, got THE DREAMLAND on ,but i really need more research on that Theatre.

Hey Look up the Fly-in Drive-in for cars and planes,thats no joke it is on my homepage.Boats would have to be the Float-in Drive-in.Weird right.

Yeah,your right and i know your state with the TVA has plenty of lakes!

Maybe it always held 500 cars? Billboard, Aug. 8, 1953: “Panther Drive-In is nearing completion and was slated to open August 1. The drive-in is at Lufkin, Tex., and is owned and operated by Phil Isley. It has 500-car capacity.”

The Exhibitor, Nov. 4, 1953: “Mr. and Mrs. Phil R. Isley drove to Lufkin, Tex., for the opening of their new Panther Drive-In, accompanied by W. H. O’Bryan, a partner, and Virginia Harper, both of Oklahoma City. O’Bryan is auditor for the circuit. Paul Short, NSS, also attended the opening with them.”

The Exhibitor, Nov. 11, 1953: “The Panther Drive-In, Lufkin, Tex., was officially opened by Phil Isley and executives of the Phil Isley Theatres, along with the mayor and other civic dignitaries. This 650-car ozoner played to a vast audience of more than 2,500.”