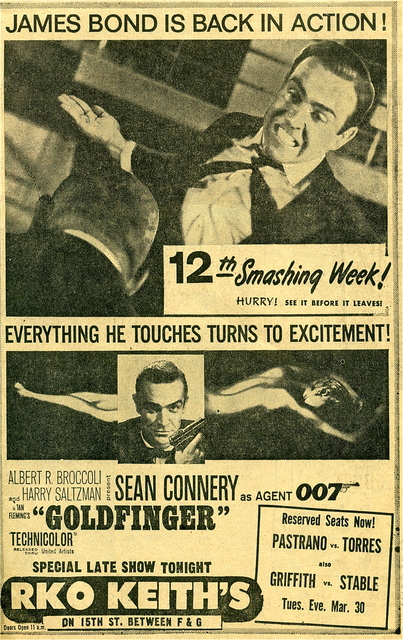 Opened on August 19, 1912 as a vaudeville house known as Chase’s Polite Vaudeville Theatre, for owner Plimpton Chase. It was sold the following year to B.F. Keith and renamed B.F. Keith’s Theatre.

The theatre closed briefly in 1928 and reopened three weeks later with motion pictures on the bill with vaudeville. Keith’s remained a movie theater for the next four decades.

It was remodeled in 1954 to the plans of architect John J. McNamara, and renovated again in 1976 when Don King took over its operation. The theater finally closed in 1978.

Despite its designation as a national landmark, the old RKO Keith’s Theatre was torn down with only its facade remaining.

My father, Charles Noske, was a manager at Keith’s in DC in the 30s and 40s until he enlisted. He loved working there and used to tell me stories of the ushers, the candy girls, the movies and the stars who came to opening night premieres. He met the likes of Fred and Ginger, Raymond Massey (whom he declared a “regular guy”), and Frank Sinatra (who he says played poker pretty well). I have been looking for more information on this movie house (as he called them) for years. What a find! Thanks to all of you for sharing your pictures and thoughts. Charlie’s daughter, Karen

Listed below are the final films to play at the Keith’s.

This last triple bill of AIP-Pam Grier was the final booking at the Keith’s Theater. It played two weeks, and beginning the week of March 1, 1978, the theater was DARK.

Other films I saw at Keith’s were:

SAMSON AND DELILAH/ULYSSES (re-issuses) (on 10/31/59) BIDMAN OF ALCATRAZ (7/62)(with my then girlfriend Peggy Harris), TARAS BULBA, KINGS OF THE SUN, THE PINK PANTHER, FROM RUSSIA, WITH LOVE (5/23/64), GOLDFINGER, HELP!, THUNDERBALL, BOY DID I GET A WRONG NUMBER, RETURN OF THE SEVEN, HOW TO SUCEED IN BUINESS, THE ALAMO (1967 re-release), FOR A FEW DOLLARS MORE, EIGHT ON THE LAM, YOU ONLY LIVE TWICE, IN THE HEAT OF THE NIGHT (9/2/67), HOUR OF THE GUN, THE SCALPHUNTERS, THE DEVIL’S BRIGADE, YOURS MINE AND HOURS, THE THOMAS CROWN AFFAIR, WEST SIDE STORY (re-release), GUNS OF THE MAGNIFICENT SEVEN, MIDNIGHT COWBOY (with my friend Joyce Khosrofian), COTTON COMES TO HARLEM, CANNON FOR CORDOVA, and DIAMONDS ARE FOREVER on 1/16/72) (with University of Maryland classmate Jamie Drago) (the last film I saw in D.C. before I left for California).

Most of these films I saw were at Saturday matinees beause the admissions were cheaper.

James Bond aficionados will probably noticed that I did not see DR. NO or ON HER MAJESTY’S SECRET SERVICE at Keith’s. I saw DR. NO at Warner theater in West Chester, PA on 6/22/63. Didn’t think I’d like George Lazenby as James Bond, so I skipped it.

The keiths was home to all James Bond movies. I hated this theatre for movies. The projrction booth was so high that it projected an very bad Keystone effect.

Even when this was a vaudeville theater in the early 1900s, there were still early movies on the program. The Silent Film Still Archive has two programs from 1907 and from 1908 showing Vitagraph actuality films on the program.

There is an excellent 1928 photo of the Keith’s on the Historic-Memphis.com website’s Theatre page. Here’s a link to the page.

The first film I saw at Keith’s was THE LONG GREY LINE in 1955. The last was THE ORGANIZATION in 1971. In between were a lot of good flicks (MANCHURIAN CANDIDATE, GOLDFINGER, THUNDERBALL and so on. By the early 70’s many of the old stand-by downtown theatres had either closed (Capitol, Metropolitan,) or turned to porn (Playhouse, Trans-Lux, Warner(!)) before closing. In my Army days in the city, I would catch my bus in front of Treasury on 15th Street across the street from Keith’s. I would walk up Pennsylvania Avenue past the Willard Hotel, which, at that time, was in full decline (as was 14th Street) and boarded up. Happily the Willard has come back.

Keith’s is, alas, gone. The space is now occupied by the Old Ebbitt Grill. Could have turned out worse.

Does anyone know if there are archives or other historical documents pertaining to this theatre when it was a vaudeville house? My grandfather, Harry A. Chick, was a vaudeville entertainer who lived in Washington at the time, and I am hoping to find some information for our family’s geneaology collection.