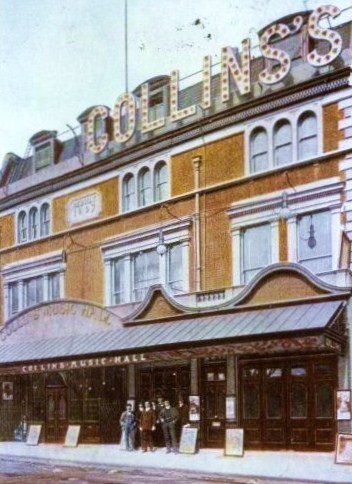 Located in the north London inner-city district of Islington. Dating from 1794, when it was a pub with a ‘saloon theatre’, by 1840, it was known as the Lansdowne Arms and Music Hall. In 1861, it was purchased by Samuel Collins. On 4th November 1863 it opened as the 600 seat Collins' Music Hall.

It was re-built to the plans of architect A.E.A. Woodrow and the enlarged theatre re-opened on 23rd December 1897 as Collins' Theatre of Varieties. The capacity was for 1,800, with seating provided for 489 in orchestra stalls, which included 10 seats in the two boxes located on each side of the stage. There were 239 seats in the dress circle, which again had a box on each side of the proscenium, and there were 290 seats in the gallery. By June 1904, it was featuring the Bioscope as part of the programme. From 1908 through World War I it was known as the Islington Hippodrome Theatre and cinema use became more prevalent in the years 1912 to 1915.

From 25th March 1919, Charles Gulliver was the managing director and it had reverted back to the name Collin’s Music Hall, presenting many top name artistes. It ran successfully as a variety theatre until September 1958, when a fire destroyed Anderson’s Wood Merchants at the rear of the theatre, and did considerable damage to Collins' Music Hall.

It stood empty and unused for several years, and on 23rd April 1963, the remaining contents, fixtures and fittings were auctioned off. The remains of the building became a wood store for Anderson’s, and this use continued until around 2000. The building was demolished, apart from the facade. Today, the facade provides an entrance to a Waterstone’s bookstore, with housing built on the site of the theatre and adjacent wood yard. There is a Blue Plaque on the facade marking the history of the theatre.