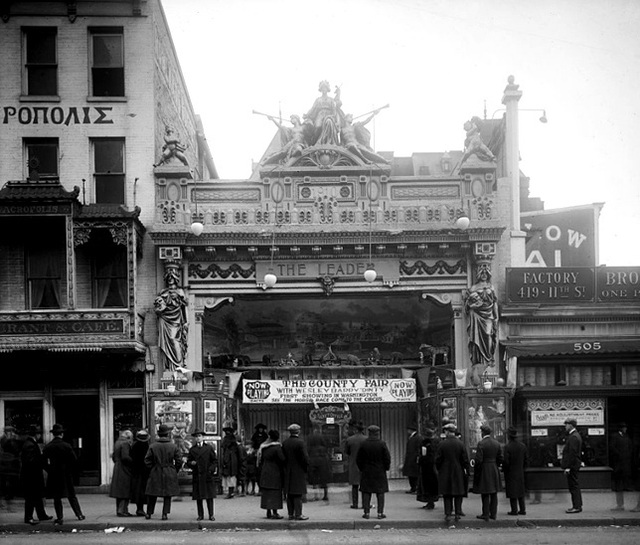 Opened in 1910, the Leader Theater lasted for five decades. For the final seven years of its life, from 1953 it was re-named Pix Theatre, after the operators of the Pix Theatre at 13th Street and New York Avenue lost the lease on that building. The Pix Theatre went over to screening adult movies and closed in 1960.

Here is another great photo:

“Direct from the Astor Theater in New York” and now playing at the the Leader Theater in D.C.

“Astonishing scenes filmed among the savage Kia Kia head hunters of New Guinea are shown in an unusual photoplay attraction, "Shipwrecked Among Cannibals,” which will be shown at the Leader Theater this week commencing this afternoon. The film was made by two adventurous camera men shipwrecked off the coast of the territory occupied by the Kia Kia. The savage customs of the head hunters, their mode of life and the grewsome decorations of their homes are illustrated in the production."

This photo has been posted before, but it’s worth pointing out that 505 Ninth Street NW is now the adress of a large office building. Status of the Leader should be closed/demolished, as none of the buildings in the photo are currently in existence.
http://tinyurl.com/cspnd5

Here is a 9/7/19 ad from the Washington Post:
http://tinyurl.com/dxutld

All of the Shorpy photos are lifted from the Library of Congress website. All Shorpy does is delete the source information and add their own watermark.

Different 1925 photo added of “The Air Mail”, courtesy of Y-Block Guy Facebook page. Possibly a Library of Congrss pic too. But one we’ve not seen either way.