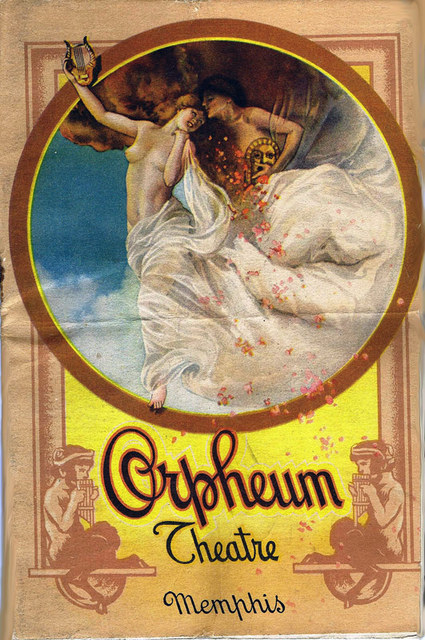 On September 22, 1890, Memphis patrons flocked to the opening of the new Grand Opera House, called the ‘social event of 1890’. It was designed by J.B. McElfatrick & Sons, a prominent architectural firm specializing in theatres, which built several theatres on Broadway. The opening bill was Miss Emma Juch and her Grand English Opera Company, numbering about 125 performers. The event had generated so much enthusiasm that the management decided to auction the sale of tickets. After the prime seats went at auction the remainder were sold to the public. The opening night opera was “Les Huguenots”. Memphis society filled every seat, and reviews were glowing.

The theatre was constructed on the site of a coal year owned by C.B. Byron & Co. at S. Main Street and Beale Street. It was a large parcel of land so the building was not restricted by a lot of surrounding structures. Twenty-five gentlemen purchased the land for $75,000. The theatre’s final cost was £200.000.

It was a four-story building faced with Blue Bedford stone from Indiana. There was an entrance on S. Main Street and one on Beale Street, but it is not known if there was a colored balcony. It seated 2,100 in comfortable rows and boxes. The stage was 50 feet deep, 82 feet wide and 80 feet high. Areas were frescoed, gilded, tiled, carpeted, draped and lavishly furnished. Both the ladies and gentlemen’s retiring rooms were furnished elegantly. The theatre could be lit by both gas and electricity. The only interior photos which remain are of the club rooms of the Chickasaw Guards which give an idea of the decor.

In 1899, John D. Hopkins purchased the Grand Opera House and made it over, installing new all-electric lights. Lower ticket prices (no more than 50 cents) and increased matinees brought greater revenue. The theatre now had a stock company and the name ‘Hopkins’ twinkled on the new electric sign.

In 1902, the entertainment was changed to ‘high class vaudeville’ and another renovation took place in 1903. In 1906, Mme. Sarah Bernhardt played two sold out performances.

In 1907, Hopkins passed his theatrical circuit over to Martin Beck with the Orpheum Circuit. Another renovation of the theatre took place and the new sign read ‘Orpheum Vaudeville’. The first recorded feature film at the theatre was in the summer of 1914, “Indian Wars”. Ruth (later known as Gracie) Allen, Fanny Brice and Houdini all had their time on the Orpheum Theatre stage. In 1917, movies, cartoons and newsreels became a standard part of the vaudeville program. Helen Keller was the best-remembered celebrity of 1921, and Houdini returned in 1923. The program for the week of October 15 of that year was headlined by Blossom Seeley, Bernie Fields and Bert Lahr. After the theatre closed for the night of October 17, 1923, a fire was reported. The Tri-State Manufacturing Company, a clothier, had leased the three stories of the commercial space in the front of the building where the fire had started. A story was told that some of the patrons in the balcony had complained about the heat, although it was October. Once the fire was visible, it could not be controlled. Everyone who could get to the backstage tried to quickly salvage whatever they could. Stage hands risked their lives to save Miss Seeley’s wardrobe, but were met by a cool ‘Thanks’ from the actress. An elaborate puppet act was completely destroyed, but no lives were lost. One of the largest crowds in its history gathered to watch the Orpheum Theatre burn.

The land was finally cleared in 1927 to build the new RKO Orpheum Theatre, the current structure by architects Rapp & Rapp, which opened on this site almost exactly 5 years later.

The loss in the fire that destroyed the Orpheum, the Tri-State Manufacturing Co., and the stores on the lower floor early this morning was estimated at over $250,000.

The Orpheum, for 34 years the home of theatricals on Main Street, was destroyed by a spectacular fire that left in place of the once beautiful auditorium, the former palatial Chickasaw Club, only a mass of blackened, jagged ruins.

Starting at 11:16 o'clock last night, exactly 30 minutes after the last of the vaudeville playgoers had filed out, the blaze, as though spread to every part of the four-story structure by a massive torch, within two hours had completely devastated the building.

Vaudevillians and second men tugged and struggled to save their baggage and personal effects, and succeeded.

The theatre, erected in 1889 by a little handful of Memphis men at a cost of $100,000, was owned by the heirs of Colonel W.D. Bethell, at one time mayor of Memphis.

The Orpheum theatre’s loss in scenery, stage effects and other properties, may reach another $50,000. Insurance was carried at the eastern offices of Vannah Taylor, manager of the local house, was unable to say to what extent the circuit was indemnified.

The second, third and fourth floors of the front part of the structure were rented by the Tri-State Manufacturing Co., makers of women’s dresses and aprons. It was in the workshop of this concern on the Beale avenue side of the building that the fire was first observed by Charley Toler, whose association with the theatre is almost as old as the theatre itself.

Although eight pumpers, two trucks and two water towers were on Main and Beale streets playing half a dozen streams of water through the upper windows of the building, within three minutes the blaze as though fanned by a master power blower was beyond the control of any group of men. Tremendous and continuous sweep of wind from the southeast seemed to reverse itself and carry the fire forward to the front part of the third and fourth floors of the building as though a tremendous eddy was surging forth with it.

Parapets and fire walls proved futile. First the front half of the structure went.

The blaze illuminated the sky for miles around and sending vast billows of flaming sparks into the air. As the roof and each successive floor and partition fell a new eruption of cherry red sparks and burn embers would be sent hurtling to the heavens to circle and spread about the buildings across Beale avenue and Front street. Even the Hotel Gayoso was given a baptism of fire.

Thousands of spectators, after the show diners and late partyies joined with hundreds of Memphians who had left their homes to view the spectacle, more stupendous than Pain ever dreamed of in his wildest days. “The Fall of Pompeii” and “Last Days of Rome” were hand plays by comparison.

At exactly midnight while the lights in the theatre still blazed and Blossom Seeley’s name burned with undimmed fervor on the big electric sign on Main Street, the cupola on the south corner of the Main street side fell with a resounding crash. The heat became terrific on the streets and policemen unnecessarily gave spectators instructions to move back.

The crowd surged forward and as each of the four great outside and two great inde brick separations toppled and fell, it slowly moved back, awed by the impressiveness of the blaze.

Just how the blaze started will probably never be known. It had its beginning on the third floor of the building in the showroom where a score or more of women have been wont to spend their daylight hours toiling over a similar number of sewing machines in the manufacturing companyâ€™s plant and which was owned by Joseph and John Kriveher. Their loss was placed at from $25,000 to $35,000.

On the street level floors Jimâ€™s Barber shop and a small confectionery and the Singer Sewing Machine Companyâ€™s Property was covered by the quick work of the salvage corps and partly saved.

The musicians defied the flames which were rapidly sweeping towards the big proscenium arch and stage and rescued most of their instruments.

Actors rushed in and frantically saved their trunks. Those who had been assigned to upper floors were not so fortunate.

Blossom Seeley and her husband, Benny Fields, were the heaviest losers among the actor folk. Their setting was completely destroyed. An ermine wrap costing $3,000, Miss Fields said, was burned, too. Fields was able to save but one of his trunks before ordered from the theatre by police, he said. Others saved part of their effects.

The loss hardest to replace will be that of Jewell, who owned the Manikin act, although in figures it will not be as great as that of Miss Seeleyâ€™s. Jewell expects to experience much difficulty in creating a new set. One actor who came out of the theatre without his collar and necktie defied the police to stop him from going back after them and got away with it.

Whether the Orpheum will be rebuilt as a theatre is problematical. When the front half was destroyed and it appeared as though the stage and auditorium were going to be saved, Mr. Edrington was hopeful that it could be rebuilt.

â€œProbably put some offices in front,â€ he said. Then as the flames spread further and further back, over the parapet and he saw his hope fading, he remarked to a friend, â€œWell, itâ€™s a nice site for a fine hotel.â€

In 1889 a small group of Memphians led by Col. Bethell decided that the thrown was entitled to a new and fine theatre. They built the house and in the years that followed every celebrity of note trod its boards. Emma Juch, operatic queen, opened the house in October of its first year with a fine production of â€œThe Huguenots.â€ It was the pride of Memphis in those days. The silver voice of Adelina Patti was heard there before variety and later vaudeville became popular. Frederick Warde, Otis Skinner, Richard Mansfield, James Oâ€™Neill, every Shakespearean actor of note during the nineties and every musical comedy celebrity on the American stage appeared at the Grand Opera House.

In the meantime Col. Bethell had bought the interest of his associates and became sole owner of the theatre. Then in 1894 Col. H.L. Brinkley and some of his friends decided that Memphis needed another theatre, so they built the Lyceum. For 10 years the competition was keen and the rivalry intense.

While the road shows and â€œcombinationsâ€ were flourishing the late Frank Gray, beloved of all newspaper men, was made manager. In 1899 the theatre was thoroughly remodeled and overhauled. A.B. Morrison, still one of the most popular theatre managers ever known, was placed at the helm.

The bill consisted of Blossom Seeley, Burns and Lynn, Bert Hanlon, Lahr and Mercedes, Anderson and Burt, Van and Bell and the Jewell manikins.

As the Grand Opera House, this theater is listed in the 1897-98 edition of the Julius Cahn Official Theatrical Guide. It was under the management of Staub, Jefferson, Klaw & Erlanger. Ticket prices ranged from 25 cents to $1. There were 747 orchestra seats, 582 balcony seats and 1,000 gallery seats, total: 2,329. The theater was on the ground floor and had both gas and electric illumination. The proscenium opening was 38 feet wide X 42 feet high, the stage was 65 feet deep. There were 9 in the house orchestra. The other theater listed under Memphis in this Guide was the New Lyceum Theatre with 2,010 seats. Memphis' population in 1897 was 100,000.

Here’s a song tribute to Blossom Seeley, last headliner at the old Orpheum. The musician has included several images of the old Orpheum along with at least one of the new (existing) Orpheum, built on the same site. Good tune, very reminicent of Blossom Seeley’s own style, worth the 2 ½ minutes of your time. It’s called “Hot Blossom.” http://www.youtube.com/watch?v=SpgYei_I5Ko

The cover of a 28 page Orpheum Theatre Program, dated January 5, 1914 has been posted. The program does verify that the Orpheum had begun showing “first run Motion Pictures” along with the Vaudeville acts.