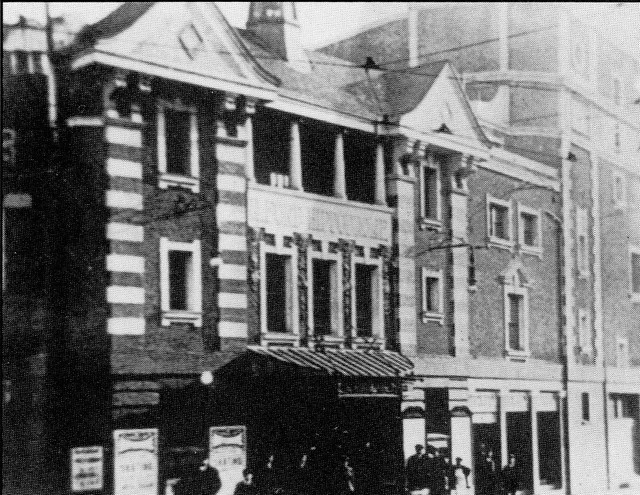 Located on Ilford Lane at the corner of High Road. The Ilford Hippodrome Theatre was opened on 8th November 1909 and was built for Walter Gibbons chain; London Theatres of Variety Ltd. Its terra-cotta frontage stretched along Ilford Lane and was in a Moorish style. Above the entrance was a minaret feature.

Inside the Renaissance style auditorium, with a ceiling said to resemble the Palace of Versailles, seating was provided in orchestra, dress circle a gallery levels, and as well as 2,500 seats there were 500 standing places. The proscenium was 33 feet wide and the stage was 32 feet deep and 46 feet deep. It operated as a playhouse and a variety theatre, and was equipped to screen films from its opening.

In the 1930’s it was taken over by Metropolitan and Provincial Cinematograph Theatres Ltd. and was equipped with Western Electric(WE) sound system, and for film performances, the seating capacity was 1,874. Cinema use was most common on Sunday’s when live performances were not allowed.

It was during the run of the Lew Grade produced pantomime "Robinson Crusoe" starring Rene Houston and Donald Stewart, that disaster struck. On the evening of 12th January 1945, a German V2 rocket fell on a row of cottages at the rear of the theatre, killing 15 people. The blast also demolished the dressing room block at the rear of the theatre, killing one person and injuring over 100 others, including chorus girls, backstage staff and people on the street outside. The blast tore into the theatre itself, throwing Rene Houston into the wings and Donald Stewart off the stage and into the orchestra pit. Scenery came crashing down, but the audience were totally stunned. The stage manager immediately appealed for calm, and with the orchestra striking up a tune, the audience left the building in an orderly evacuation. Two days later, the roof of the theatre collapsed, bringing the gallery seating area down with it.

The ruins of the Ilford Hippodrome Theatre stood empty and unused for the following 12 years, and it was demolished in 1957, when parts of the masonry on the façade fell onto a passing trolly-bus. Offices and shops, including an Iceland store, were later built on the site.

This story is not accurate. According to Rene Houston’s own autobiography it was her husband – Donald Stewart – who was thrown into the orchestra pit, she was thrown back into the wings. When she stood up all she could see was a pile of bricks where he had been standing only a few seconds before. According to Ms Houston, she took it like a trouper, but according to my late aunt, Miss Pauline Peer, who was in the audience that night, Rene Houston had a screaming fit until she saw Donald Stewart was alive in the orchestra pit.