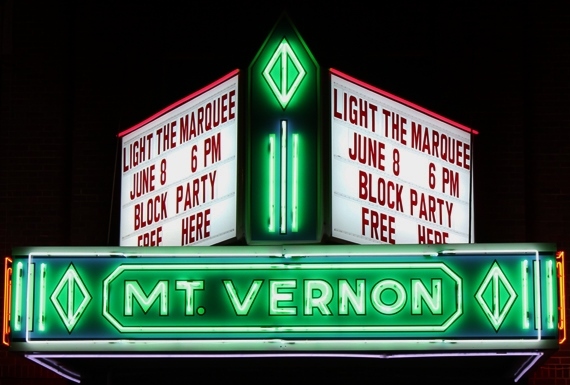 As of October 2009, The Mount Vernon Theater has been undergoing restoration/rehabilitation, including preventative roof repairs, basic rewiring (for preconstruction), and general cleanup for better understanding of what will be needed for repairs and upgrades, etc. An architectural study is underway to determine the scope of work needed to bring the theatre into compliance with all safety & building codes, with great care being taken to protect the building’s original aesthetic and historic record. It was reopened January 17, 2018.

From the original set of blueprints, the architectural firm was, Robert and Company architects and engineers of Atlanta, GA., with a J.W. Armstead listed as the ‘in charge of’ person. The blueprints are dated 4-27-1935. In the detail section for the cut stone, J.S. Reed Stone Company of Birmingham, AL and Georgia Marble Works of Montgomery, AL are noted. Ingalls Iron Works, Tallassee, AL is noted on a structural iron work detail.

The style is listed as Art Deco but it is not lavish or ‘high’ Art Deco. The styling is most definitely Art Deco but simple and understated. Most notable deco features are cut stone inlay blocks on the exterior, the marquee, and the glass and metal wall sconces.

Also of note, there are numerous backstage signatures on the walls and large air duct on stage left. Traveling troups and local performers from the 1930’s and 1940’s, left their marks, with the latest dated signature from the early 1970’s, when the theatre was in it’s final days of limited use. The most famous signature found is of Hank Williams, who apparently, played the stage and - according to several good sources - frequented the area on more than a few occasions.

I am pleased to see this website is now functional. I tried, off and on for a couple of years to log in and update but continued to get a message the site was down for retooling – or something like that.

On a whim, I decided to try again and ta-da! The site looks like it got a nice facelift and some technical streamlining to make uploads and comments super-easy.

Much has happened since our initial posting: 1. The building was deeded to the new, 501©3 certified Mt, Vernon Theatre, Inc.. An architectural easement overlay was needed to divide the actual theatre from the remainder of the block-wide building, which, would continue to house The Masonic Lodge (the deeding owners), an insurance company and a hair salon. The portion that houses the insurance company is believed to have served as a concession stand during the theatre’s early days. It is not exactly known when the building was subdivided but save for the insurance company, the theatre has been deeded mostly in tact. The only street-addressing window that will serve a function (ticket/admin office) for the theatre, is the right-side, ground floor window. It is uncertain if the theatre organization will pursue ownership of other portions of the building but it has been discussed as a long-term option – but only after the primary portions of the approved design has been completed. 2. Architectural designs and a demolition plan were drawn up and approved by the City’s building inspector. The green light was given for the initial interior demo and this included opening up the lobby area and making way for expanded restrooms. The design includes punching through the rear of the theatre to create a backstage and a general green room area with two small dressing rooms and bathroom facilities for performers. 3. Fundraising was begun to raise an est. $51,000 for the fire sprinkle system. 4. New garden features including, three iron park benches, trees and flowering shrubbery were installed along the side of the theatre, creating an outdoor lobby/event space for the theatre and a green space for the Community to enjoy. 4. The marquee was renovated and up-fitted, and a “Light The Night” block party was held to celebrate the turning on of the marquee.

Once the fundraising goal for the sprinkle system is met and the system is installed, the theatre will be able to host small fundraiser performances and events inside the theatre.

Hi – I’ve been watching the theater come back to life, and I’m anxious for it to re-open. I’m writing because my father, Robert Buford Tant, who was born and raised here in Tallassee, and whose name is on the memorial at City Hall, was a Japanese prisoner of war during the last 14 months of WWII. As such, he responded to President George W. Bush’s request for WWII POWs to document their experiences for inclusion in the Congressional Library. I have a copy of the video, and thought you might want to include it in the opening event, and I would be honored if you would like to do that. It runs about 20-30 minutes, as I recall. It’s also available on the Library of Congress web site at this url, http://memory.loc.gov/diglib/vhp/story/loc.natlib.afc2001001.54407/mv0001001.stream in case you want to preview it. It was made on the Thanksgiving before he died, and the friend who recorded it put a lot of generic military music and pictures at the opening, and dad starts talking at 2.30. I think it would be a wonderful inclusion in your prgram, and hope you do, as well. I look forward to hearing from you at your earliest convenience.
My phone number is 253-359-3875, and I live at 116 Freeman Ave. Thanks for your time and attention. Linda Tant Miller

A more comprehensive update will be “COMING SOON to a Cinema Treasures website near you!”