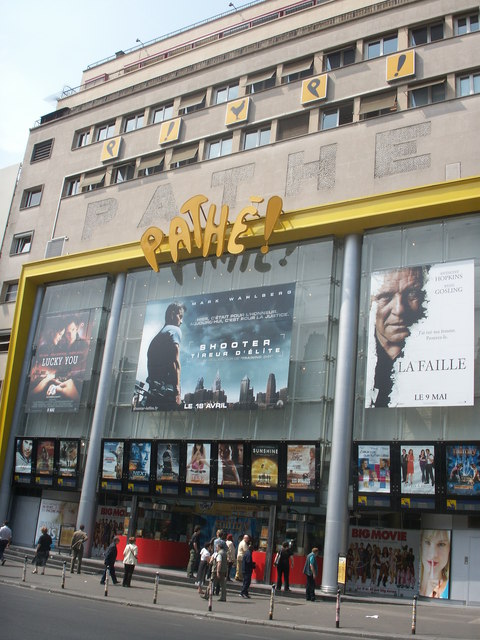 This is a story of four seperate cinemas which are now combined into one!

On the site of 140-142 Boulevard de Clichy in 1810 was a coaching inn known as the Café Wepler. In 1955, it was purchased by Pathe and was demolished. The 1,700-seat Pathe Wepler Cinema was opened after 10 months building work. It was built as a modern rival to the great 6,420-seat Gaumont Palace, just a few yards away. The cinema boasted the largest safety-glass facade in the world, measuring 13 metres x 12, and weighed 12 tons. Seating was provided on three levels, in orchestra, mezzanine and grand circle.

In September 1969, the Pathe Wepler was twinned, with 1,100 seats in the upper part, using the mezzanine and grand circle levels. A 480 seat luxury cinema named Caravelle (after the aircraft) was created in the lower part of the building. In the Caravelle auditorium, patrons could smoke and drink while watching the film, making for a party atmosphere in the space, which was decorated like a garden.

In 1994, the Pathe Wepler was expanded to the plans of architect P. Muyle, by the addition of another six screens that had originally been the Pathe Clichy, located in the rear at 7-8 Avenue de Clichy. This originally opened as the 1,100-seat Metropolis which opened in 1919 at 8 Avenue de Clichy in the 17th Area of Paris. It was renamed Select in 1920 and in 1930 it was renamed Pathe-Select, and retained its single 1,100 seat auditorium until 1971 when it was tripled, with two screens each seating 200 in the former orchestra and a larger 496-seat screen in the former balcony.

At 7 Avenue de Clicy in the 18th Area of Paris was the Mirages Cinema, a former cabaret where Maurice Chevalier had performed, which became a cinema in 1932. It was purchased by Pathe in 1973 who created two more auditoriums in the building, as well as retaining the former cabaret space. It was gutted internally in 1991, and three new ‘space-age’ auditoriums were created.

Today, the former Pathe Clichy building seats 490 in the upper screen and 200 and 210 in the lower screens. The former Mirages Cinema building has screens seating 430, 135 and 100. The former Select/Pathe Clichy in 2018 operates as a separate 5-screen cinema (and has its own page on Cinema Treasures), but by 2021 has been incorporated into the complex.

I took my own more photos this year but various photos are found here:
View link

Here is my own photo from this month:
View link