Held an former for the New Granada theatre on February 26th, 1936 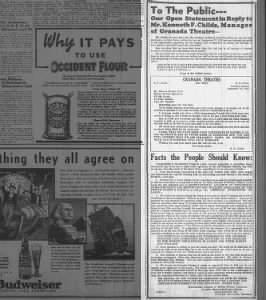 I do stand corrected if the theatre opened in 1935 (I can check the date in a local newspaper article.) I can remember being taken there by my grandmother to see a re-release of “Snow White” when I was pre-school age probably around 1945.

The photo is not of the Granada. The Granada was built in the ‘40’s in the Mulford Garage building which had been converted to also house several stores including the Mulford printing company. Ken Childs built and ran the theatre until a fire destroyed the whole complex. Since the Plumb and Majestic Theatres were both Publix Great States theatres, the Granada had a deal to be the sole exhibitor of Warner Bros. pictures in Streator, while all Paramount pictures played the Plumb. The Granada also played “B” level Fox and MGM pictures. The Streator Times-Press did an article on theatres in Streator which featured a photo of the theatre when it was open and another with coverage of the fire with the marquee crashed to the street after the fire. Those are the only two photos of the theatre I’ve ever seen. As a kid I grew up attending matinees at the Granada including a series of 16mm Hopalong Cassidy titles during the days when he was big on TV. It was a particularly suitable theatre since Clarence Mulford, the creator of Hopalong Cassidy, was a Streator native and the Granada was in a building owned by the Mulford family.