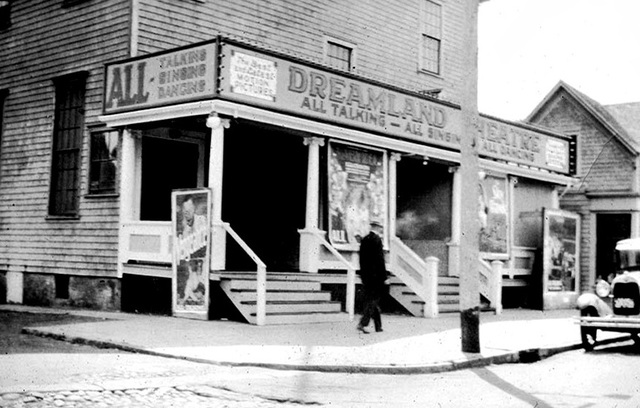 The Dreamland Theatre on Nantucket Island is a real treasure. This theatre sits in the heart of an historic village with very strict building codes. The grey shingles and white trim are typical of the weathered island architecture.

“The theatre has some history, although I’m not sure if it is more than 100 yrs old or not.” It was once part of a large oceanfront hotel which was taken apart in sections. This section was loaded onto a barge and ferried around the harbor to become the gem that it is now.

The seats have only recently been changed from hard wood, to modern theatre seating with cushions. Much about the wooden structure remains the same and it is a pavilion-style gem.

Closed in 2005, the Dreamland Theatre was dismantled in 2009, with promises that it will be rebuilt into a new movie theatre.

My grandfather was an actor at the Dreamland Theatre performing Vaudeville in the early 1900’s, would like to know more about him and the Dreamland Theater.He eventually went to Canada where he raised a family and performed in Nova Scotia. Write to me if you can. Thank you.

I dropped by on Monday, July 17, and learned that the theater had been closed at the “end of the 2005 season.” It is, however, under reconstruction, and local folks tell me that theater will be reopened and that upstairs spaces are being converted into condos. I recall seeing one movie there in 1962, my previous visit to Nantucket Island, and I think it was the Disney film “Bon Voyage.” The only theater now showing films in the town of Nantucket is the 87-seat Starlite, which is a theater-restaurant just down the block from the Dreamland. The Starlite has 35mm projection and is currently showing “Superman Returns”, “An Inconvenient Truth,” etc. I was told there is another small cinema in the town of Siasconset, about 9 miles away.

The Dreamland is a venue for the annual Nantucket film festival, held in the early-summer. I have been told that movie presentation there dates all the way back to the 1905-1910 period. If that’s true, then it would be one of the oldest continuously-operating (albeit Summers-only) cinemas in the USA.

After being closed for two years, the 150 year old theatre has recently been purchased by a foundation which plans to restore and preserve it. Read about that here:
http://tinyurl.com/22rsrf

I have been informed that the Dreamland is being slowly dismantled; the parts numbered so that it can be reassembled later as part of the new complex on the site.

By Alicia Hull
NANTUCKET INQUIRER AND MIRROR
March 27, 2009
The historic Dreamland, Nantucketâ€™s movie theater for nearly a hundred years, was a fraction of its former self Wednesday afternoon, as bulldozers ripped off the back half of the building, exposing the area where moviegoers once sat and projectionists worked. The move was the first major step towards building a new theatre complex on the site.

The Dreamland Foundation met last Monday with more than 60 subcontractors interested in the demolition of the historic South Water Street movie house.

More Times Breaking News
Falmouth homes without water after main break – 8:53 am Harwich police arrest man in break-ins – 8:20 am One taken to hospital after Sandwich crash – 8:17 am Historic Nantucket theater is being torn down – 8:01 am See All Breaking News Stories Â» Eight subcontractors will be hired for the first phase of the project, six of whom will be based on Nantucket. One of them, Toscana Corp., has already been chosen to perform some of the work.

â€œSome of the subcontractors told me it was the first time in their recollection that a project of this size was passed down to subcontractors,â€ said Patty Roggeveen, executive director of the foundation.

â€œItâ€™s something we feel really good about. Individual contracting companies here might not have enough people to work at an accelerated speed, so weâ€™re encouraging people to work together. Itâ€™s a very unique way of doing this. The board has always considered this a community space and that is community owned in a way.â€

Once portions of the building are removed, the exposed core of the building â€" the most historic â€" will be carefully taken apart board by board and beam by beam. The pieces will then be trucked off and stored, so that sections of the structure can be preserved and used in the new building. The goal is to have the building completed by August of 2010, but the schedule is largely dependent on fundraising over the next few months.

Here’s an article about the former Dreamland Theatre, which includes a picture, and the plans to replace it: View link

The Dreamland is listed in the 1927 Film Daily Yearbook as having 400 seats and open 3 days per week.

Nantucket’s historic movie house is being rebuilt, thanks to the Dreamland Foundation. After a few years with the darkened theatre sitting in a state of disrepair, the building was purchased by a newly created non-profit with the focus on rebuilding the theatre. Some of the historic elements were saved from the old theatre, but this is a new building built to resemble the old. The new layout will include performance space and the theatre will be open year-round. Expect the re-opening in 2012.

According to http://www.nantucketdreamland.org/ , It is now showing movies again.