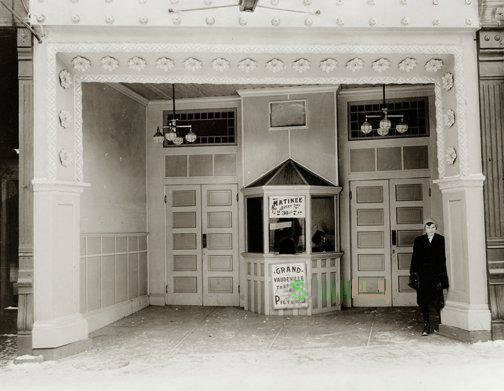 The Niagara Temple was an early purpose-built neighborhood cinema in the Roxbury section of Boston. It was located on Blue Hill Avenue near Grove Hall. It was a free-standing structure with a fancy facade. It may have been operated at one time by the New England Theatres Operating Company. It apparently opened around 1908-1910. It was operating in 1927 as the Niagara Theatre.

The address was 320 Blue Hill Ave.

Thank you, Roger. I had been told that it was on the lower-numbered end of Blue Hill Ave, not far from the Shawmut/Roxie which was at 263 Blue Hill Ave. The 1927 Film Daily Yearbook lists it as being in Roxbury, open 7 days per week, and having 900 seats. However, I think that it had between 600 and 650 seats. Joe Cifre said that it was also known as Zenacon Temple, apparently when it was first opened.

It was a free-standing structure with an elaborate and distinctive facade. There was a side-street along the right side of the building. The entrance was in the center with a tiny retail store to the left and a slightly larger store on the right. A couple of steps (possibly marble) led up from the sidewalk to the center box-office with a pair of French doors on each side. There was an arch above the entrance which appears to be full of stained glass. There was a vertical sign in front of the arch, but no marquee. There was no NETOCO (New England Theatre Operating Co.) oval emblem out front, but the style of the photos of the exterior and interior is very much like the company photos which NETOCO made of their other theaters during the 1910-1920 period.

Although the facade of the Niagara Temple was rather ornate, the interior was quite plain. There was some decoration around the proscenium and on either side of it. On the upper rear wall was a small 2-port projection booth, which was not quite centered. Next to it was a small balcony with 3 or 4 rows of seats.

When was this demolished and what is on the site now?

The last reference I have to it is that it was listed in the 1927 Film Daily Yearbook. I don’t know what happened to it after that, or even if it was ever wired for sound. I can’t get a Google Street View for the address.

In a 1918 Boston street directory, the Niagara Temple is listed at 320 Blue Hill Avenue, east side, at or near Lawrence Avenue.

There’s a single story brick block there now. There’s a non-profit in the building.

The photo posted above must have been made after a renovation project – the entrance is somewhat different than the original. That had a center boxoffice with a double door on each side, but it was wider, and also had 2 or 3 steps up from the sidewalk. The newer entrance seems to be at street level.