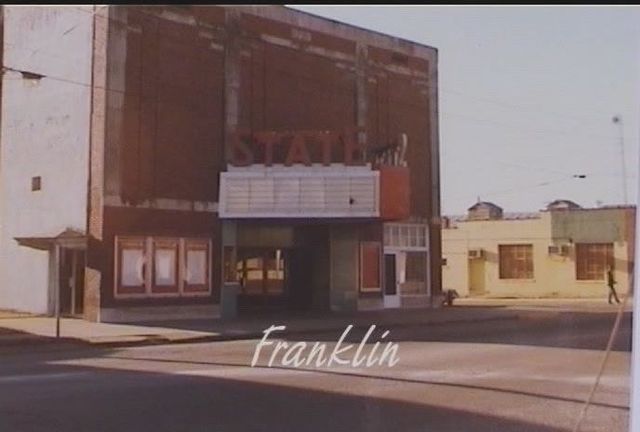 Two years ago,it was clearly just sitting there doing nothing in hulking emptiness.

Following up with ghamilton’s post, the building appears to still be doing just that. It looks like it was repurposed at some recent point, from what the marquee looks like in the Google Maps street view. However, it appears to be closed and abandoned at present.

Yes,I was in Franklin last week.( I wander willy-nilly) It is NOW being used as a church,again.

Anyone know when it stopped being used as a theater? I remember going there in the mid-70s with a special young lady. Even then it seemed a bit of an anachronism – a single screen in the middle of a small town. Thank you for posting this, brings back good memories!

forgottentreasuresofsoco_franklin on January 2, 2013 at 8:11 am

When I moved to Franklin in 1999, this movie theater was being used as a dance studio. The seats had been torn out and the floor filled in to make it level. A church moved in shortly after the people who owned the dance studio moved out. I can’t say for certain when, but another church moved in and they did buy this building. They have since become a mainstay in the community. The city did, however, at some point between churches, replace the overhang with grants. Dan Howe,President of the Downtown Franklin Association asked that the city keep it so that he could put a museum in it to promote the area. The city declined.

Once I could drive I often took the winding roads between Wakefield and Franklin to see a movie here. Among the films I saw: DIARY OF A MAD HOUSEWIFE, JOE, THE GRADUATE, GODFATHER 2….and an especially exciting screening on a hot summer night of THE TEN COMMANDMENTS. Most of the audience was from a local Pentecostal church and the screening after a while turned into something like a revival meeting.