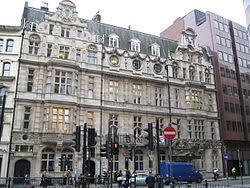 Located in the former Holborn Town Hall which was built in 1906 to the plans of architects Warwick & Hall. The Holborn Hall was operating as a cinema in 1910 and 1911. It was later known as Finsbury Town Hall and was used for functions and special events. The building also contained Holborn Library. The building was last used as the Shangai Blues Restaurant & Bar.

It was sold to property developers in 1999, to be demolished and a new office block known as ‘The Connection’ was planned. In 2009, the building still stands.