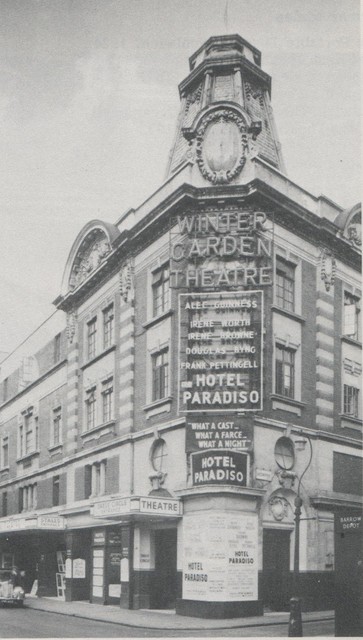 Originally on this Drury Lane, Covent Garden site was the Mogul Tavern, which dated from Elizabethan times, and was frequented by Nell Gwynne, who lived nearby. By the end of the 17th Century it was known as the Great Mogul. Rebuilt in December 1847 as the Mogul Saloon which seated 500. By 1851 it was known as the Middlesex Music Hall. It was so successful, it was re-built in 1872 and further improvements and alterations were made in 1875, only to be re-built again in 1891.

It was taken over by Oswald Stoll and was re-built to the plans of famed theatre architect Frank Matcham. The old theatre was closed on 11th January 1910, and the New Middlesex Theatre of Varieties opened on 30th October 1911. The exterior of the building was in red brick, Portland stone and polished granite. The façade was 155 feet long on Shelton Street and 115 feet long on Drury Lane, which is where the entrance was at number 197 (which today does not map).

The front of house foyer areas were decorated in a Renaissance style, while the auditorium was decorated in an Arabesque style. There was a total seating capacity for 1,900 with 823 in orchestra stalls and boxes, 476 in the dress circle and 601 in the balcony level. Standing room brought the total capacity up to 3,000. The stage was 26 feet deep. There was a refreshment room on the first floor, which also had its own separate street entrance.

Films were screened as part of the variety programme from at least 1912 to 1915, and French review shows were popular until it was closed on 1st February 1919.

Taken over by George Grossmith, it re-decorated in a French style, and re-opened as the Winter Garden Theatre on 20th May 1919 with “Kissing Time”, a musical play by Guy Bolton & P.G. Woodhouse, which ran for 430 performances. Initally musical comedies were popular at the Winter Garden Theatre, and included Sophie Tucker in "Follow A Star", Gracie Fields in "Walk This Way". During the 1930’s, the theatre played host to many flops. A success in July 1943 was Jack Buchanan in "It’s Time to Dance" and in 1945 a Donald Wolfit season of plays.

The Winter Garden Theatre was taken over by the Rank Organisation from 1st December 1945, but there were not many successful productions at the theatre under their control, apart from Agatha Christie’s "Witness For the Prosecution" from October 1953 and Tyrone Power in George Bernard Shaw’s "The Devil’s Desciple" in 1956. The Rank Organisation sold the theatre to a property developer in 1959, with a covenant forbidding a new theatre could not be built on the site. The Winter Garden Theatre played its final production "Alice In Wonderland" from December 1959 to January 1960.

The building was then gutted and left boarded-up for several years. Plans for the new building to be built on the site were turned down by the London County Council, as there was no provision for a theatre. The site was purchased by Charles Forte in September 1961, and it was finally demolished in 1965.

There was much argument until finally a proposal for a new theatre and office block was finally approved, with a new theatre located on land at the rear on Parker Street, which was not part of the covenant. The new theatre, designed by architect Paul Turtkovic and stage designer Sean Kenny was built in the early-1970’s, opening as the New London Theatre in 1973, which did a spell as a cinema in the late-1970’s, before “Cats” took over in 1981 and ran for 21 years. It was re-named Gillian Lynne Theatre in 2018 and has its own page on Cinema Treasures.

A history of the theatres on this Drury Lane site over the years, with vintage and current photographs and memorabilia here:
http://www.arthurlloyd.co.uk/NewLondonTheatre.htm

Thanks Ken, very interesting site. At least in London when they tear down an old theater they built a new one at the same site.Can not say that for the good old U.S.of A.