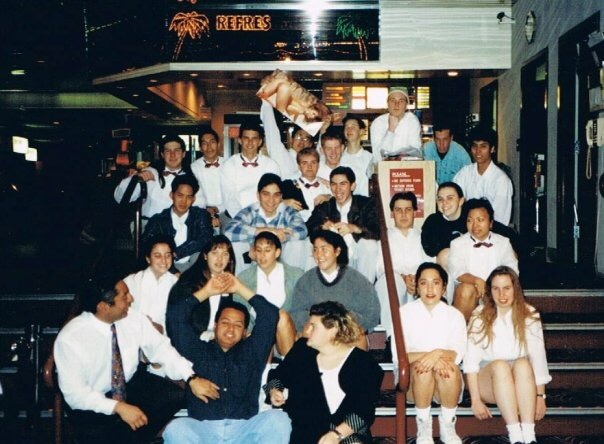 This theatre opened June 29, 1984 as Peninsula Cinema 6 on the 3rd floor of the Courtyard Mall. On June 20, 1986 it was expanded, by annexing 2-3 adjacent store spaces which added two full sized screens and one smaller screen.

It finally closed in the late-1990’s as the mall fell on harder times and the theatre was eventually demolished. It was replaced by a new Pacific theatres 13 on the same floor of the now outdoor mall in a different location which was formerly Macy’s.

Contributed by B Sharkey
Get Movie Tickets & Showtimes

This was the first theatre in the Krikorian chain. Company founder/namesake George Krikorian grew tired of driving a distance, in order to take his family to the movies, and speculated that there was a need for a local cinema; thus, launching Krikorian Premiere Theatres in 1984. The Penninsula 9, along with the rest of Krikorian’s pre stadium chain, was sold to Regal in 1996. The chain was relaunched a few years later, with a series of modern stadium builds.

In the mid to late 80s I visited this theater many times. It was quite nice for its day. Located in the mall above the ice skating rink. Great memories seeing some classics there with my Grandma: Critters, Ruthless People, Color of Money, At Close Range… she’d take us to see just about anything. It was closed when the mall transformed from an indoor to outdoor venue. A new theater was built on the same level a few stores over. Still a great place to see a movie.

Wonderful memories at this cinema. I remember seeing such 90s “classics” as Independence Day, Men in Black, and Deep Impact here. I think the Krikorian was the best thing The Courtyard had going for it—my older brother tells me that the shopping center was often referred to as “The Graveyard” by area teens.

Did this theatre actually get demolished? I just visited the 13-plex last month and the existing complex (http://cinematreasures.org/theaters/39914) is built in such a way that makes me believe Regal just added four screens and a lobby, renovated the existing screens with stadium seating and called it a day. The 13-plex has a very long hallway leading past three screens (the 7,8,9 expansion?) that leads into a very large square space with restrooms nearby (ie. the original lobby) which then leads into six more screens (the original 1-6).

If you see the comments on the Promenade Stadium 13, there seems to be agreement that this 9-plex is still part of the 13-plex. Perhaps the listings should be combined?

I can confirm that the Regal Cinemas Promenade 13-plex is entirely brand new and it was not a renovation of the Kirkorian Peninsula 9. When the roof was removed from the mall, the 3rd floor area where the new cinema resides was demolished so the roof could be raised to accommodate the stadium seating. A portion of the theater (screens 11, 12 and 13) may overlap with the previous theater (screens 7, 8, and 9). Most of the new theater was built in any area previously occupied by May Co.

The grand opening ad for the original theater shows the exact location as being above the ice skating rink, between Bullock’s and May Co. Assuming that the ice skating rink’s location never changed during the mall renovation, I’m guessing that the original Peninsula 6 approximately occupies what is now the northern tip of the current Regal above Ice Chalet? I found an image of the old mall showing the Bullock’s and part of what looks like the cinema here: http://blogs.dailybreeze.com/history/files/2015/07/courtyardcrop.jpg