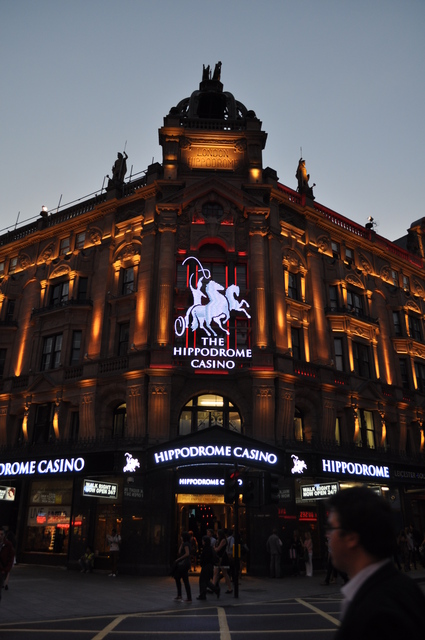 Built for the Moss Empires Ltd. chain of variety theatres, and located on the corner of Charing Cross Road and Cranbourne Street in the heart of London’s West End theatre district at Leicester Square. The London Hippodrome was opened on 15th January 1900 with a spactacular named "Giddy Ostend". It was designed by noted theatre architect Frank Matcham as a circus, with a central circus ring that also contained a huge water tank containing 100,000 gallons of water for aquatic spectaculars.

The exterior of the building in red sandstone, red brick and terra cotta, is designed in a Free-Classical style. Over the corner entrance at the top of the building is a large iron skeleton dome, which supports a sculptured group of a chariot with rearing horses. This is flanked on each side by statues of Roman centurions. The side elevation on Great Newport Street has a large panel, with the name ‘HIPPODROME’ in huge sculptured stone letters. Like many of Matcham’s theatres, there was only a small entrance foyer. In 1906, American swimming star Annette Kellerman-billed as ‘The Million Doller Mermaid’ performed her swimming and diving act.

In 1909, Frank Matcham was re-engaged to redesign the auditorium into a conventional theatre layout. The 44 feet wide proscenium was brought forward and the stage enlarged to 40 feet deep and 74 feet wide. The main details of the original Flemish-Renaissance style decoration was retained. Orchestra stalls seating replaced the circus ring on the main floor. Seating was now provided for 383 in the orchestra stalls, 468 in the circle, 474 in the gallery and 64 in boxes, which surrounded the stalls under the circle. There were standing spaces for 1,500. Backstage there were 25 dressing rooms and an orchestra room (the orchestra pit could accommodate 30 musicians).

It re-opened on 2nd August 1909 as the Hippodrome Theatre. It was equipped with a projection box to screen films as part of the variety programme. The projection box was located at the rear centre of the orchestra stalls, taking in the space previously occupied by boxes. In 1910 the Hippodrome Theatre hosted the Russian Ballet and they gave the first UK performance of Tchaikovsky’s “Swan Lake”. Revues became popular and one titled "Round in Fifty" starred Sophie Tucker and Barry Lupino. Another featured famed American songwriter Irving Berlin.

The Hippodrome Theatre was used extensively for morning film trade show screenings in 1929 and 1930. It was also used as a public cinema on a number of occasions; from 24th June 1929 for three weeks, when Bridgette Helm in “The Wonderful Lie” (Die Wonderbare Luge der Nina Petrowna); was screened. From 4th December 1932, Martha Eggerth in "Where Is This Lady?" was screened, and from 12th October 1936 until 29th November 1936 when the MGM musical "The Great Zeigfeld" starring William Powell had a run, transfered from His Majesty’s Theatre.

The London Hippodrome continued as one of the Stoll-Moss group of major variety theatres, with artists topping the bill included; Jack Buchanan, Binnie Hale, Elsie Randolph, Paul Whiteman & His Band, George Robey and Max Wall. During World War II, musical shows came to the Hippodrome; "Perchance To Dream" starring Ivor Novello & Margaret Rutherford, and "The Lisbon Story". The Revue "Starlight Roof" starred Vic Oliver & Pat Kirkwood and introduced Julie Andrews in here first appearance on the public stage. Maurice Chevalier appeared in his one man show in the late-1940’s and the theatre was briefly renamed the London Follies Bergere when Tommy Cooper starred in "Encore De Follies". The musical "Bet Your Life" starred Arthur Askey, and "Wedding In Paris" starred Evelyn Laye. In the 1950’s a season of plays was mounted "Anna Lucasta", "The Desperate Hours" and American actor Lloyd Nolan in "The Caine Mutiny Court-Martial" the final production was "The Dave King Show" in 1957, when during its run Dave King was taken ill and was replaced by Benny Hill.

In 1958, the the theatre was taken over by Bernard Delfont & Charles Forte. The interior was reconstructed into a theatre-restaurant, removing or hiding almost all of the original Frank Matcham interior. A large neon sign was attached over the front corner entrance and it re-opened as The Talk of the Town on 11th September 1958. It was very successful and attracted many top British and International stars for the next 25 years. Artistes who appeared at this time include: Frank Sinatra, Judy Garland, Sophie Tucker, Sammy Davis Jr., Eartha Kitt, Ethel Merman, Pearl Bailey, Englebert Humperdink, Shirley Bassey, Lena Horne, Tony Bennett, Caterina Valente, Val Doonican, Tom Jones, Cleo Laine, Sandie Shaw, Lulu, Matt Monroe, Rolf Harris, Cliff Richard, The Seekers, Herman’s Hermits, The Carpenters, Paul Anka, Stevie Wonder, Sacha Distel and Neil Sedaka. The last show was in 1982 when Joe Longthorne was the star.

In 1983, it was taken over by Peter Stingfellow and converted into a discotheque, re-opening on 6th November 1983 as the Hippodrome Nightclub & Disco. Gay nights were introduced on Monday’s in the late-1980’s, and the venture was operated successfully until 2007, when problems with drugs and violence caused the building to loose its licence and it was closed. In late-2008, live performances came back to the London Hippodrome (perhaps for the final time) in the form of the Montreal based “Cirque du Soleil” company, which gave its final performance on 27th June 2009.

Immediately after, work began on a restoration of the building both externally and internally, where many original features would be restored or re-created. A new floor has been inserted at gallery level, giving unprecedented close-up views of the top section of the original 40 feet high proscenium opening, and the minstrels gallery. Cabaret performances are now staged in a space previously occupied by the theatre’s stage, with seating for 200. It reopened as the Hippodrome Casino on 12th July 2012.

The London Hippodrome is a Grade II Listed building.

Further to the above, I had the opportunity to tour the Hippodrome last week, during the rebuilding work. There is now no trace of the stalls projection box, which must have been swept away on conversion to the Talk of the Town in 1958. However there is a large projection box at the rear of the Gallery, not mentioned above. It is difficult to say if this is original or a later addition as much of the plasterwork is missing, however I would GUESS that it is a later, maybe 1920’s or 30’s construction. The portholes are bricked up (again some considerable time ago). Perhaps this was built for the trade and public screenings at the end of the 1920’s?

There is also a charming cartoon mural backstage painted by Rolf Harris after a stint at the venue in 1979!

the theatre featured on the cover of Talk of the Town by the Pretenders, showing the neon sign in the late 70's
http://www.flickr.com/photos/ocad123/402506523/

Guardian article with a photo http://www.guardian.co.uk/uk/2012/jul/13/hippodrome-casino-titanic-opulence-recession

More recent photos of the restoration process in this set:– HIPPODROME RESTORATION

Is this same building called Talk of the town in the movie “Judy”(about Judy Garland)?

Yes it is the venue for the 1969 London performances, the last time she appeared on stage in London.

The Hackney Empire Theatre was used for the London Hippodrome sequences in the film “Judy”.