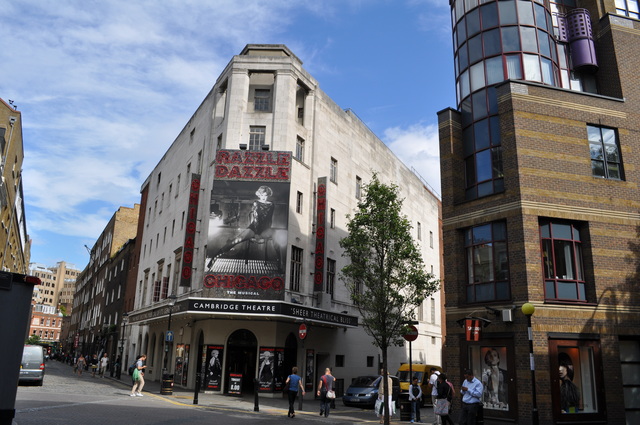 It has a corner entrance at Earlham Street and Mercer Street, and the stage end is on Shelton Street. Its exterior is in white Portland stone and brick, with many metal frame windows. The interior of the theatre was designed by Serge Ivan Chermayeff, a Russian, who worked as director of modern furnishings at Waring & Gillow department store, and went on to work with famed architect Eric Mendelsohn at the De La Warr Pavilion, Bexhill-on-Sea, Sussex. He created a rather Teutonic Art Deco style, similar to film sets in German films at that time. The outer foyer vestibule, which has a circular shape, has three Art Deco style panels with bas-relief nude figures of men and women exercising. Above is a back lit circular dome ceiling. The main foyer has pink tinted etched mirrors depicting female nude figures on the wall beside the circle entrance and deep coves in the ceiling containing concealed lighting. Entry doors to the auditorium, are faced with etched bronze, with a zig-zag motif.

Inside the auditorium, there is seating for 474 in the orchestra stalls (which is just below street level), 293 in the dress circle and 442 in a very steep upper circle. There is a box for 5 persons on each of the side-walls at dress circle level, and above each box a panel, one showing buildings against a stylized sun and the other showing last rays of the setting sun with waves. The original colour scheme was pink, silver and blue. In the elliptical shell shaped ceiling, are a series of ribs, which contain concealed lighting.

One drawback that has haunted the Cambridge Theatre over the years, is the relatively small stage (by West End standards) due to the owners of property at the rear of the theatre refusing to sell for demolition when it was due to be built. The proscenium is 30 feet wide and the stage 32 feet deep. There are sixteen dressing rooms. The Cambridge Theatre was built with full cinema facilities, to be ready if ever they were needed.

In fact the theatre was used extensively for film trade shows during the the 1930’s, through to the 1950’s. In 1932, it became an ‘art’ cinema and screened Fritz Lang’s "M" and Max Adalbert in "Der Haupmann von Koepenick". Stage productions tended to be ballet companies and small opera productions. In March 1943, a production of George Bernard Shaw’s "Heartbreak House" starred Robert Donat and Edith Evans. Revues came in 1949 and 1950 "Sauce Tartre" and "Sauce Piquant" which began the career of Audrey Hepburn. The theatre was then under the control of Tom Arnold and Emile Littler, who also operated the nearby Palace Theatre on Cambridge Circus, Shaftesbury Avenue. They decided to re-paint the interior of both theatres, but the only paint colour available at that time after World War II was a deep plumb-red, which hid many of both of the theatre’s features, and also made them very dark.

"The Reluctant Debutant" played in 1955, and in 1960 Albert Finney in "Billy Liar" was a big hit, running until 1963. It was followed by Tommy Steele in “Half a Sixpence” and then Bruce Forsythe in “Little Me” (1964). In 1967, it was taken over by Gala Films Ltd. who had a small chain of mainly art house cinemas, and the Cambridge Theatre opened as a cinema with Anna Karina in "La Religieuse" on 28th September 1967. The final film to play at the theatre was "Will Penny" starring Charlton Heston on 13th January 1968.

Still operated by Emile Littler, live theatre returned in 1968 when John Hanson starred in productions of “The Desert Song & "The Student Prince”. The National Theatre Company played a season in 1970, presenting Maggie Smith in “Hedda Gabler” which was directed by Ingmar Bergman and Laurence Olivier starred in “The Merchant of Venice”. In 1971 Ingrid Bergman, Joss Ackland & Kenneth Williams in “Captain Brassbound’s Conversion”, Ralph Richardson in “West of Suez”, and Ian McKellan in “Hamlet”. In 1972 Peter Cook & Dudley Moore starred in “Behind the Fridge”.

The theatre lease was purchased by pop impresario Larry Parnes and he presented productions aimed at a wide audience spectrum, with offerings such as Patrick Cargill in “No Sex Please, We’re British” which was followed by the smash hit South African musical “Ipi Tombi”. Next came British Olympic Gold Medal ice skater John Curry in his "Theatre of Skating". This was followed by Joan Collins in "The Last of Mrs Cheyney", Janet Suzman in “Three Sisters” and the first UK production of "Chicago", starring Ben Cross ran for almost two years in the late-1970’s.

Taken over by the Apollo Theatres chain, headed by Paul Gregg, Billy Connelly starred in his one-man show. The theatre was then transformed into "The Magic Castle" for a Las Vegas style magic show of the same name, but this failed. It was redecorated in 1987, and returned to its Cambridge Theatre name. Since then it has found success with shows such as "Return to the Forbidden Planet" (1989), “Fame" (1995), and "Grease" (1996). The controversial "Jerry Springer-The Opera” had a successful run here, as did many other shows, some of which have been transfers from other West End theatres. In the late-2000’s the musical “Matilda” has been a big success.

Some vintage and current photographs, plus memorabilia and more history here:
http://www.arthurlloyd.co.uk/CambridgeTheatre.htm

and a shot of the art deco frieze in the foyer here:–

The exterior can be seen in “Man on the run” (1949). A fugitive villain steals a car parked outside – the owner is inside at a film Trade Show. Shortly after the police arrive and enter the lobby.