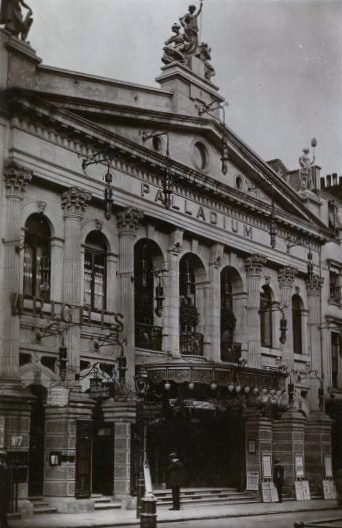 Located close to Oxford Circus in central London’s West End. In the 1860’s the Corinthian Bazaar was built on this site, to the design of Owen Lewis. In 1871, it was opened as Hengler’s Grand Cirque to the plans of J.T. Robinson. In 1884, the building was re-built to the plans of noted theatre architect C.J. Phipps. In 1895, it was converted into the National Skating Palace, with real ice.

Theatre owner Walter Gibbons employed famed theatre architect Frank Matcham to design a new variety theatre. It opened as the Palladium Theatre on 26th December 1910, with a variety programme that included Nellie Wallace, Ella Retford and Ella Shields, plus Martin Harvey in a one act play "The Conspiracy".

Matcham retained the original façade that had been built for the Corinthian Bazaar. It has a Classical temple style front, with Corinthian columns on tall pedestals. Matcham added a sculpture to the top of the pediment. To the left of entrance is a large booking hall. The main foyer is decorated in a French Rococo style, as is the auditorium.

Inside the 2,325-seat auditorium, seating was provided for 984 in the orchestra stalls, 598 in the dress circle and 743 in the upper circle. There are three boxes on each side of the 47 feet wide proscenium. The stage is 45 feet deep and was built with a double revolve. At the rear of the stalls was a large Palm Court with Norwegian Rose granite walls, which in the early days served tea (with a ladies orchestra playing), it is now the stalls bar.

The Palladium Theatre was equipped to screen films as part of the variety shows from its early days, and variety performances continued until the 1920’s when revues became the latest vogue. From 19th March 1928, the Palladium Theatre was purchased by the General Cinema Corporation and was converted into a cinema opening with Victor McLaglen in “A Girl in Every Port” plus Marie Prevost in “The Rush Hour” and a variety programme on the stage. A Wurltzer 2Manual/8Ranks organ was installed and played by resident organist Reginald Foort. Cine-Variety only lasted three months with the final films on 23rd June 1928; William Boyd in “Dress Parade” and Hugh Trevor in “Wallflowers”. When films ceased, the Wurlitzer organ was transferred to the Plaza Cinema, Allerton, Liverpool, where it was installed and re-opened in August 1928 by organist Reginald Foort.

The Palladium Theatre came under the direction of George Black and high speed variety became popular featuring stars such as Duke Ellington & His Orchestra, Adelaide Hall, Louis Armstrong and Ethel Waters, each playing two week engagements. "Peter Pan" was staged here every Christmas from 1930 until 1938, principle ‘boys’ playing Peter include Jean Forbes-Robinson (1930-1934 & 1938), Nova Pilbeam (1935), Elsa Lanchester (1936) and Anna Neagle (1937). From 1934, the theatre was officially known as the London Palladium. In 1936 The Crazy Gang took up residence in revues named “Life Begins at Oxford Circus”. They transferred to the Victoria Palace Theatre in 1940.

In 1941 the theatre took a direct hit from a German parachute mine which lodged over the stage house. Thankfully it was diffused.

In 1946, the theatre was managed by Val Parnell and had become part of the Stoll-Moss Group of variety theatres. From 1948, it began a policy of big name variety, with many top stars such as Bob Hope, Liberace, Ethel Merman, Nat King Cole, Ella Fitzgerald, Jimmy Durante, Gypsy Rose Lee, Judy Garland, Danny Kaye, Frankie Laine and Frank Sinatra topping the bill. The London Palladium became as famous as the Palace Theatre in New York City.

On 25th September 1955, ‘Sunday Night at the London Palladium’ was televised for the first time. Hosted by Tommy Trinder, topping the bill that night were Gracie Fields and Guy Mitchell. The hour-long ‘live’ broadcast produced by ATV ran on Independent Television for 15 years. Variety continued into the 1960’s and 1970’s with artists such as The Beach Boys, The Mamas and The Papas (Cass Elliot died after two days into the run), Ginger Rogers, Donald O'Conner, Liza Minnelli, Diana Ross and even Bette Davis in her one woman show.

In more recent years, big musicals have taken over the stage. "Michael Crawford in "Barnham", Tommy Steele in "Singin' In the Rain" (where film projection was used in one sequence), "La Cage Aux Folles", "Joseph and The Amazing Technicolor Dreamcoat", Yul Brynner in "The King and I", "Chitty Chitty Bang, Bang", "The Sound of Music" and many more. In the late-2010’s the annual Christmas Pantomime was revived.

The London Palladium has been the location for a least two films; Alfred Hitchcok’s "The 39 Steps"(1935) starring Robert Donat, where the final ‘Mr. Memory Man’ sequence was filmed, and Judy Garland in "I Could Go on Singing"(1963).

Photo of the entrance of the Palladium here:–

Within the introduction above, reference is made to the Palladium serving as a cinema from 19th March 1928, for three months. In fact it hosted something of a double act, as this clipping attests: View link

The Six Rockets Acrobatic Act included my grandmother and her sister. More interesting stories about them are included here for readers' interest: View link

According to one of my grandmother’s daughters, she and Sophie Tucker enjoyed a good laugh and appreciated one another’s company!

I am very grateful to a CT denizen who passed on the clipping to me as part of a research project into the adventures of my grandmother. The clipping comes from an online resource about the history of the London Palladium: http://tinyurl.com/4p3pj7d

I hope these links will be useful to readers and visitors.

This Vintage Los Angeles Facebook post is from Alison Martino, daughter of singer Al Martino who performed at the London Palladium in 1953. There is a program and Al’s own home movies from that tour posted in the comments.