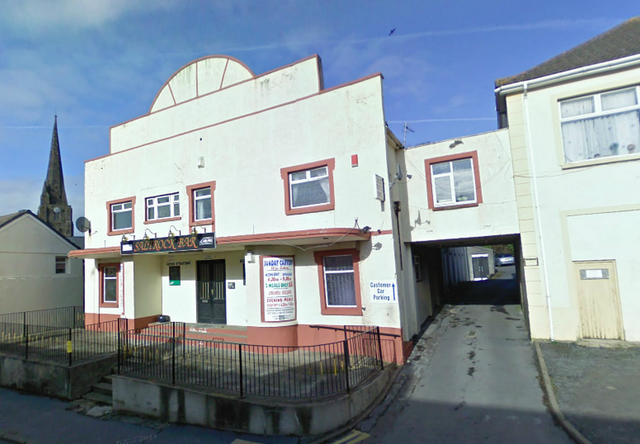 Built by A.R. Thomas and opened around 1936. It had an 18 feet wide proscenium and a 7 feet deep stage, plus two dressing rooms. The hall was fitted with a British Acoustic sound system. It was barred by the Odeon Llanelli and other cinemas. It was closed in 1968.

In 1990 it was converted into the Salt Rock Pub with a cinema theme. In 2008 an application was made by Chris Robinson to convert the building for retail use. It became ‘The Original Factory Shop’.

Thomas was NOT the owner at opening, this was a Mr. T. Foy. When it opened it was not solely films, but had occasional variety shows on its tiny 7 feet deep stage, 2 dressing rooms were provided for the performers. The proscenium was 18 feet wide. Films when shown were on a three changes of programme per week basis with one show per night with matinees on Saturday. The venue could seat just 230 patrons and prices were 7d to 1/–. Sound was provided by a British Acoustic sound system.

Mr A.R. Thomas had acquired ownership by 1951, and retained it until closure, having the BA system stripped out and replaced by an RCA Photophone sound system. He continued the policy of one show per night with matinees on Saturdays and three changes of programme per week and dropped the stage entertainment. Prices were now 1/6d to 2/1d.

What does your correspondent mean “barred by the Odeon Llanelli”? This does not make sense.

Barring was the arrangement whereby the main cinema circuits such as Odeon, ABC etc had the power, under their deals with the distributors, to prevent smaller cinemas in the surrounding area from booking the latest films for a period after their release.
In the cities this meant that a suburban cinema wouldn’t get the new films until a couple of months later, when the major circuits had finished with them.Small Independent halls were probably even further down the pecking order.
Other contributors will probably be able to explain how the system worked in practice.

This bar on cinemas by the bigger circuits was very unfair,they often booked films they were unable to fit in just to prevent the independent hall from screening it.
Then when the film had been out for a considerable period it was available for the independents, we at our indpendent cinema often had to show pictures which were released as the supporting half of a double feature as the main film.

good thing that these were often westerns with stars such as Audie Murphy as cowboy films were very popular in those days.