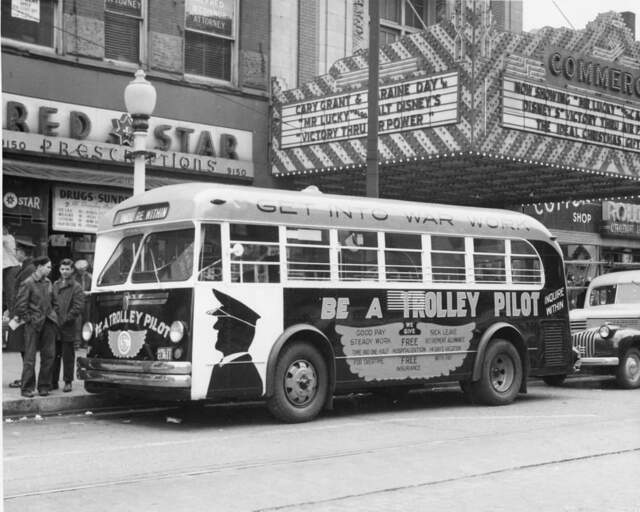 The 1,800-seat Commercial Theatre was opened on September 18, 1920, for the Ascher Brothers circuit and by 1929 had been taken over by Fox Theatres. Later it became part of the H & E Balaban chain.

The Commercial Theatre was located in the heart of the Commercial Avenue business district, near 92nd Street, and after a 1942 remodeling by architect Hal Pereira, it had a beautiful Art Deco style marquee lit with hundreds of bulbs in a zig-zag pattern.

After decades of first and second-run films, the Commercial Theatre closed in the 1960’s and went into retail use as the South Chicago Mall with little alteration to the building. It was demolished in 1997.

When did this house get torn down?

Surprised there have not been more comments on this one. Always got the impression that it was a fairly substantial movie house, which one would think would produce many happy neighborhood memories.

The May 23, 1942, issue of Boxoffice ran an article about the recent remodeling of the Commercial Theatre. The architect for the project was Hal Pereira. The marquee in the photo above was part of this project.

I remember watching with my friends “From Russia with Love” and “The Flight of The Phoenix” at the Commercial Theatre in South Chicago. As I recall, the theatre was demolished in the fall of 1969 to make way for a mini mall. My band, The Tellstars, was performing down the street at the Gayety Theatre around that same time.

An arson fire gutted the Gayety Theatre in May 1982 and it was demolished soon after to make way for a McDonald’s restaurant. The only remaing area theatre at that time was the Chelten on South Exchange Avenue which eventually suffered the same fate.

Those were indeed great times and wonderful movies at all three Southeast side cinemas.

This was converted to the South Chicago Mall in the 60’s.
Then that mall was torn down around 1997 and you could see the old screen inside.
Jim Klekowski owner of http://www.ellisavenue.com has a book on the area and I’m sure some shots, he was pretty adament about the tear down.
View link

This house was called the Fox Commercial Theatre in 1930, when the January 19 issue of The Film Daily ran a piece about Fox’s (apparently aborted) intention to replace it with a new, larger theater on the same site. Here is the item:

“Chicago— Plans for a 3,000-seat semi-atmospheric theater and office building costing about $2,000,000, to replace the recently leased Fox Commercial at 92nd and Commercial Ave. are announced by Sidney Meyer, vice president and general manager of the Fox Chicago Theaters. The house, of Spanish architecture and especially adapted for talkers, will have a stage 30 feet deep for big productions. Work of tearing down the present structure will start immediately, and it is expected to have the new building completed by September.

“Among the unusual features of the house will be a main entrance and foyer, 5O feet wide and 100 feet long, completely cut off from the auditorium so that outside noises will not interfere with the performances; a bridge-like proscenium arch allowing performers to stroll across it apparently in the open air; one of the largest switchboards in the country, and other advanced ideas.” The extravagance of demolishing and replacing a large theater not even ten years old was foregone, but William Fox’s empire soon collapsed anyway. Sic transit gloria.

All I had to do was walk thru the alley to get there. Kids paid only $.25! It’s very hard to pay today’s prices after that. Alot of movies were repeated, possibly annually. I mostly remember: 13 Ghosts (the original) and The Snow Queen, which can be seen on You Tube. Also, LOVED the $.05 candy vending machines! (I wasn’t old enough for the “makeout” balcony, haha.)