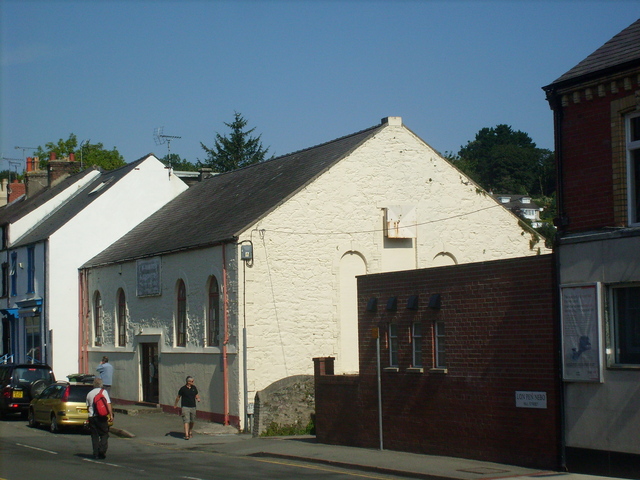 A second run hall located in the small Anglesey town of Menai Bridge, North Wales. It was operating as the Town Hall Cinema by 1937.

It was re-named Luxor Cinema around 1946 and was operated by the same company who operated the Luxor Cinema, Llanwrst.

The Luxor Cinema in Menai Bridge was closed in 1970 and became paint store. By 2010, it was in use as a store for lighting and rigging for the nearby TV studio.

The Luxor weas originally known as the “Town Hall Cinema” and was founded bgy E.H. James, owner of a small chain of cinemas which included venues in Llanrwst, Bettws y Coed, Penmaenmawr. Opened circa 1934 it had Kaylee sound and showed 3 different programmes a week with once nightly performances on Tuesday, Thursday and Frisday, two continuous performances on Monday and Wednesday and 3 shows on Saturday. The proscenium was 30 feet wide and the venue could seat 399 patrons.
It survived the 1930’s and 40’s and in 1956 installed Cinemascope on a 27feet wide screen. At this time shows were twice nightly on the continuous principle with an extra matinee on Saturdays, still with 3 changes of prtogramme per week. Prices were now 1/– to 2/3d.
Its name had now been changed to the “Luxor” (The change seems to have been made around 1939)

By 1964 Mrs James had taken control of the cinema – whether this was due to the death of her husband or illness is not known – and the cinema retained its policy of 2 shows per night and three changes per week. Prices were now 2/– to 4/–.

The cinema closed in 1970 leaving patrons now with a journey to Holyhead or Llandudno Junction if they wish to see films as they were intended to be shown.

The sound system of the Luxor at the time of closure was British Thompson Houston (BTH) as was their projection equipment.

The equipment was exactly the same as the Town Hall Cinema (now Neuadd Dwyfor)in Pwllheli.

Glad to see the first contribution on these posts has been corrected,I only mention this otherwise my comments that it was not demolished would not make sense to someone reading them for the first time.