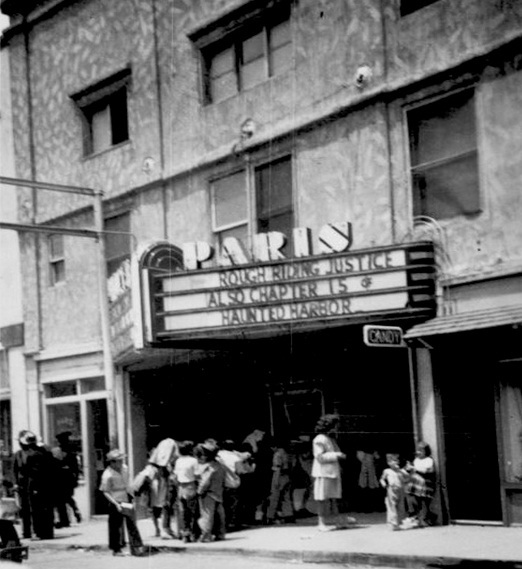 In 1948 a new 700 seat theatre was built on the site, which opened as the El Paseo Theatre in late-1948. It closed again in the 1970’s. Reopened briefly as a disco, then an short-lived art house. It has been commercial retail space since circa-1990. Now Coldwater Creek, the building is still owned by the Greer/Salmon family that opened it, and Greer Enterprises now has their offices on the second floor.

I neglected to add that the Paris' opening night film in 1914 was Thomas Ince’s “The Wrath of the Gods”, starring Sessue Hayakawa, Tsuru Aoki, and Frank Borzage (later the well-known director). Initially the Paris had distribution agreements with Keystone, American Film Mfg, Kay-Bee, Reliance, and Thanhouser.

Boxoffice of May 1, 1948, had an item headlined “Start Work in Santa Fe To Replace Old Paris” which said the site of the Paris was being cleared for construction of a new 700-seat theater. The Paris, the item said, had been “…wrecked by fire three years ago….” The replacemnt house, the El Paseo Theatre, was open by late 1948 or early 1949.

As the Paris was on the same site as the later El Paseo Theatre, it probably had the same address of 123 W. San Francisco Street.

Thanks, Joe. I’m still in 1915 and it’s going to take me awhile to get to the late 1940s! The building still boasts a stage fly and also upstairs windows along the east side in a style reminiscent of the teens (which made me think it had merely been gutted and not entirely deomolished). The front upstairs now has a large window, apparently being the new offices of Greer Enterprises.

The 700-seat capacity was also that of the Paris by WWII, apparently after a reseating. Its original capacity was claimed to be 1050 (with the narrow theatre seats then the style).

I worked at this theater as a projectionist in the early 80’s when it was managed by Bill Hill. There were also some 1 off concerts that were booked too. The theater still had the bar in the center of the auditorium when i was there. I explored this place up and down. From the crying room up in the last row (used as our film prep room), to climbing the ladder to the roof behind the stage.