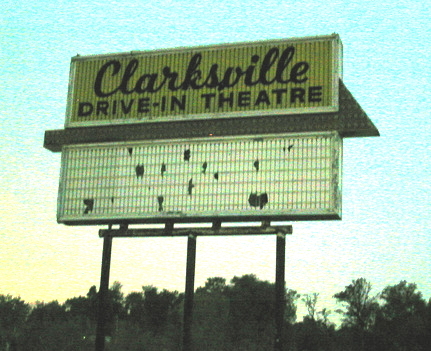 It was closed in 1984. All remnants of this are gone now except for the fencing. The area is now used a a tractor trailer parking lot for a local company.

The theater in FD Yearbook was probably not the Clarksville Drive-in; it was probably an older theater called the Theatreair Drive-in which became the Twin Drive-in after a second screen was added. The Theatreair was at 4505 Highway 31, which was apparently gone by 1970 if the information in the Rivest list is accurate,

I have not been able to locate an opening date for the Clarksville Drive-in, but the Eberson Archives indicate that Drew Eberson designed a drive-in for Clarksville in 1972.

MORE on the CLARKSVILLE DRIVE-IN in 1956 parked 548 cars and was owned by Switow Circuit.

I saw the front Page and take the money and run. Here in the summer of 1975

According to the book “Clarksville, Indiana (Images of America series)” by Jane Sarles (published 2001), on page 85, she writes that the CLARKSVILLE DRIVE-IN THEATER was opened in April, 1950. The theater operated each season from April to early November. The drive-in was closed permanently “at the end of the 1984 season”.

By the way,to be accurate, the theater was located on the SOUTH side of Brown Station Way (formerly State Road 562 or “62”), which, if traveling TOWARD Louisville (in a south/southeasterly direction), the drive-in was on the RIGHT side of the highway, not the left side.

Currently (January 2015) the Clarksville Sewer Treatment Facility next to (to the northwest of) the site has been undergoing an expansion/renovation, which has meant that Midway Park (where the soccer field,walking path, swings and picnic tables were) has been completely obliterated. All trees chopped down, almost no remnants of the park are there, as new concrete retaining basins (or whatever they are called) are now being constructed. I have heard that the site of the Clarksville Drive-In (currently covered by huge piles of dirt) will be where a new park (or just a soccer field?) will be built, but I don’t know if this info is accurate.

Another bit of trivia…..on the site of Midway Park, along the south side of Brown Station Way, once stood a beautiful old two-story brown stone house. I think it was demolished sometime in the 1990s(?). Someone told me it was once owned by T.J. Atkins, owner of a quarry near Jeffersonville. Would love to see old pics of that house, or if anyone has more background info, please contact me @ .

I posted the April 4th, 1950 grand opening ad in the photo section.