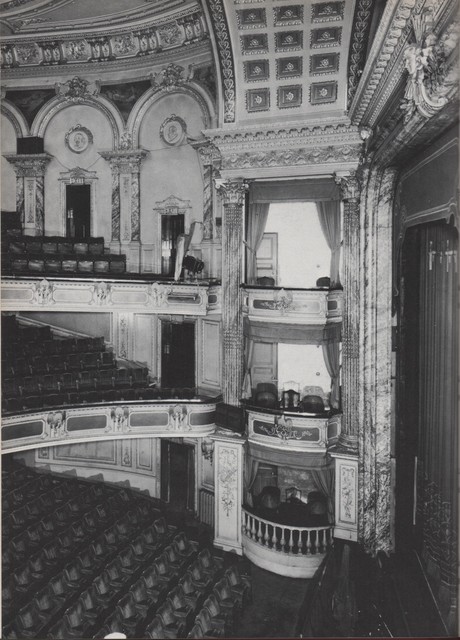 There has been a theatre on this site ever since 1705, the current Her Majesty’s Theatre being the fourth to be built. The Queen’s Theatre was built in 1705, and was designed by John Vanbrugh. The interior was remodelled by Robert Adam in 1778, it was later known as the King’s Theatre, and was destroyed by fire on 17th June 1789. Rebuilt, it re-opened on 26th March 1791, and it was in this new King’s Theatre that Mozart’s "Cosi fan Tutte" was first performed in London in 1811, followed by "The Magic Flute" in 1812. The theatre was remodelled by John Nash in 1816, and it was re-named Her Majesty’s Theatre in 1837, closing in 1852. It re-opened in 1856, but was destroyed by fire on 6th December 1867. Rebuilt again in 1869, the new Her Majesty’s Theatre was designed by Charles Lee and seated 2,500. This was not a great success and it was closed in 1890 and demolished.

The current Her Majesty’s Theatre was built in 1896, and opened on 28th April 1897 with "Seats of the Mighty" a play by Gilbert Parker. It was the final theatre to be designed by noted theatre architect C.J. Phipps, who died before it was completed. The exterior of the building is faced with Portland stone and has a massive dome on top. Originally seating 1,208 on four levels inside the auditorium. There are now 453 in the orchestra stalls, 281 in the Royal circle, 324 in the grand circle and 103 in the balcony. The proscenium is 34 feet wide, the stage 49 feet deep and there are 20 dressing rooms.

It was re-named His Majesty’s Theatre in 1902, when King Edward VIII became King after Queen Victoria. It hosted the first ever production to be staged of George Bernard Shaw’s “Pygmalion”. In 1916, it had a smash hit when the musical "Chu Chin Chow, played for 2,238 performances. Other hits in this always popular theatre’s history have been Noel Coward’s "Bitter Sweet" in July 1929 and "Brigadoon"(1949).

During the mid-1930’s, it was used by MGM as a showcase theatre for the following films: William Powell in "The Great Zeigfeld" from 1st September 1936 until 11th October 1936 (which then transfered to the London Hippodrome), Norma Shearer in "Romeo and Juliet" from 13th October 1936 until 6th December 1936, and Luise Rainer in "The Great Waltz" from 13th December 1938 until 15th January 1939.

It was re-named Her Majesty’s Theatre in 1953 when the Her Majesty Queen Elizabeth II came to the throne. Following stage hits include: “Paint Your Wagon”(1953), "The Teahouse of the August Moon"(1954), "West Side Story" from December 1958 until June 1961. Then following a redecoration, "Bye Bye Birdie" until February 1962, "Fiddler on the Roof" in 1984, running almost 4 years. The current World Pemiere production of Andrew Lloyd Webber’s "Phantom of the Opera" opened on 9th October 1986. In March 2020 the theatre was closed, together with all theatre across the country due to the Covid-19 pandemic. Theatres were still closed in July 2020 and it was announced on 28th July 2020 that the production of “Phantom of the Opera” has ended its 34 years run. The theatre is now owned by The Really Useful Group, headed by Sir Andrew Lloyd Webber. Now known as LW Theatres.

It was announced on 31st July that the theatre would receive a complete restoration, and when completed it would re-open with a newly staged production of of the original production of “Phantom of the Opera”.

Her Majesty’s Theatre is a Grade II* Listed building.

More Photo’s of Her Majesty’s here:–

This is a wonderful theater- glad to see it listed in CT. I remember “West Side Story” here in mid-1959; and I saw a performance of the same here in the mid-1980s. The Theatre Royal Haymarket is just across the street, and up the street to the north, and on the same side, there was a prominent cinema.

Her Majesty’s has a wonderful stage to audience relationship. The upper levels have a good angle of view to the stage & are not set back at too great a distance. Saw a Ben Travers farce there & acoustics & sightlines surpassed the performance.

I’m surprised to see Her Majesty’s Theatre listed on CT as I didn’t know it had been used as a cinema, though temporarily. I saw Phantom in 1986 with the original cast – Michael Crawford and Sarah Brightman. The stage machinery, the lights and sound effects were innovative at that time. I remember being stunned by the chandelier rising from the stage in the opening scene. We had seats at the back of the stalls, maybe 2 or 3 rows from the back, but the sightlines were still good, as the circle was unobtrusive. It was constantly sold out but my dad got tickets bought on the street corner for the same day’s evening performance, at 50£ each. Expensive but we didn’t regret it.