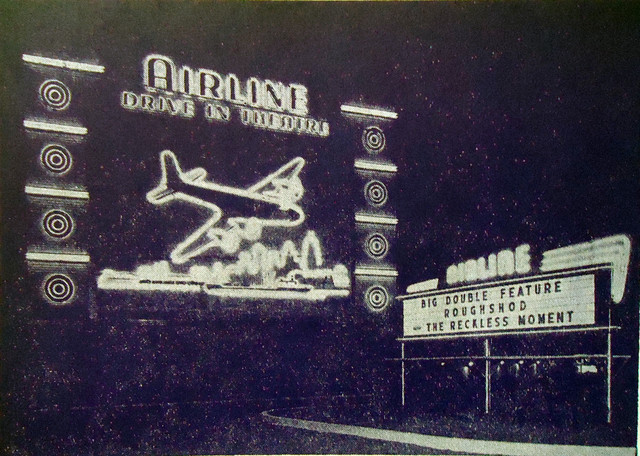 The Airline Drive-In opened at 7:00 p.m. on June 10, 1950. The premier feature was “Canadian Pacific” with Randolph Scott and Jane Wyatt. The Airline advertised a playground and a ‘handy snack bar with car service’. It was still open in 1979.

Went here a few times while living in the north Houston suburb of Aldine between May 1977 and March 1979.

Saw CLOSE ENCOUNTERS here. The film broke at one point and it was,like,a 10 minute wait. needless to say,no one was pleased.

Saw JAWS 2 here but we had to leave because my mom got a coke accidently dumped on her from the roof of the car where my sister and her friends were sitting. We missed GRAY LADY DOWN, a WW II movie. no biggie,the movie kinda sucks really.

The AIRLINE DRIVE IN in 1956 parked 600 cars and at that time it was owned by LONE STAR THEATRES.

There is a 1965 list of Houston drive-ins on this site:
http://www.cinemahouston.info/driveins.htm

Maybe it should be called the Airline Fly-In!

I was born in Houston and lived there from 1949 to 1962. The Airline was our neighborhood drive-in, but I was very young when my folks took me there, and my memories are pretty vague, except for the beautiful mural on the back of the screen tower and some truly great neon work. We passed it every time we had to get anywhere in Houston! The plane is supposed to be flying over downtown and the Ship Channel. Anyway, I can explain how Airline Drive got its name. It was US 75 back in the day, AKA Dallas Highway, because that was the auto route to Dallas. It was also the route that airplanes flew to get to Dallas, so I’m sure in the 1920s or 30s, whenever it was named, it was a really futuristic, progressive-sounding one.

The site is now a motel(Star Inn & Suites).