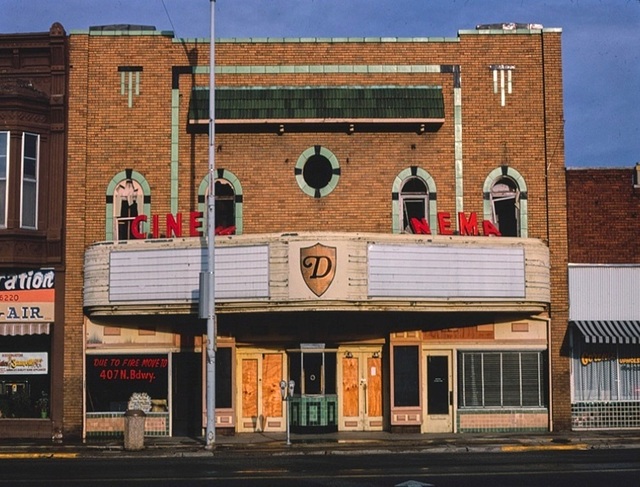 The Cozy Theater dates back to at least 1935. The Cozy Theater was still operating until 1983, when it was destroyed by fire. It was part of the Dickinson Theatres chain.

Comparing the American Classics Image, and Google, the theater is long gone. Consider it demolished. The building to it’s left is still there.

You’ll also notice the building says in the photo that they’ve relocated due to a fire in the theater.

And the address they give in the “Moved due to fire” is 407 N. Broadway, the address of the Colonial / Fox Theater, also in Pittsburg, KS.

The theatres page of the Pittsburg, Kansas Memories web site says that the Cozy Theatre opened in 1930, and operated as the Cinema Theatre from 1969 until closing in 1983 (the page says that the building “burned down” in spring, 1983, though the American Classic Images photo that lostmemory linked to in an earlier comment, showing the burned-out theater, is dated August, 1982. ACI also has this photo of the Cozy dated March, 1985.)

Dickinson actually purchased the theatre in 1966. I remember the first movie that played there was Elvis Presley in PARADISE HAWAIIAN STYLE.