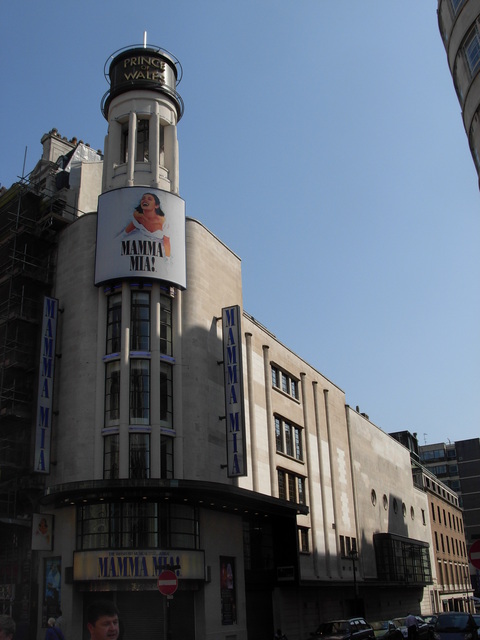 The current Prince of Wales Theatre is the second theatre to be built on this site, located on Coventry Street between Piccadilly Circus and Leicester Square in the heart of London’s West End theatre district. The Prince’s Theatre was opened on 18th January 1884 with 1,062 seats and was designed by noted theatre architect C.J. Phipps in a Moorish style. It was re-named Prince of Wales Theatre in 1886. It was closed on 16th January 1937 with a revue "Encore Les Dames", to be demolished. The adjacent Prince’s Hotel which was also designed by C.J. Phipps, was retained (today it is the Thistle Piccadilly Hotel).

The new Prince of Wales Theatre was designed by noted cinema architect Robert Cromie in a typical Art Deco style of its period. Gracie Fields laid the foundation stone on 17th June 1937, and the theatre opened on 27th October 1937 with a revue "Les Follies de Paris et Londres".

The corner entrance on Coventry Street and Oxendon Street has a tall rounded tower and is faced in Portland stone blocks. The decoration in the foyer and auditorium is quite plain, with concealed lighting troughs running across the auditorium ceiling. Seating is provided in orchestra stalls and a circle, which overhangs the stalls up to 21 feet away from the proscenium, giving an intimate feel. The auditorium is also very wide. There is a single box located on the side-walls beside the proscenium. Beneath the auditorium is the stalls bar, which has a central dance floor.

The Prince of Wales Theatre was equipped to screen films, and on 16th December 1940, Charlie Chaplin in "The Great Dictator" had its central London run, concurrent with the Gaumont Haymarket and the Regal Marble Arch. The run of this film ended at the Prince of Wales Theatre on 23rd February 1941. Other films that played at the theatre were MGM’s "An American Romance" starring Brian Donlevy, from September to 5th November 1944, Danny Kaye in "The Secret Life of Walter Mitty" from October 1948, and Walt Disney’s "Cinderella" in January 1950.

The theatre became part of the General Theatres Corporation in 1942 (hence the film use) and it pass to the Moss Empires Ltd. theatre chain in 1947. It has been mainly used for revues, and musicals although the occasional play has been produced. Shows of note are; "Happidrome"(1941), "No Orchids For Miss Blandish"(1942), then three shows starring Sid Field "Strike A New Note"(1943), "Strike It Again"(1944), "Piccadilly Hayride"(1946). Mae West starring in "Diamond Lil"(1948), "Harvey" again with Sid Field starring in his final part from January 1949. There were revues starring Frankie Howard, Norman Wisdom, Benny Hill and Winifred Atwell, followed by the play "The World of Suzy Wong" in November 1959. The auditorium was altered in the early-1960’s. Sammy Davis Jr, appeared from August 1961, followed in October 1961 with the musical "Do-Re-Mi", until February 1962, and then Neil Simon’s "Come Blow Your Horn". This was followed by Barbra Streisand starring in “Funny Girl”(1965).

In recent years the Prince of Wales Theatre has been taken over by Cameron Mackintosh, and has hosted “The Full Monty”. It underwent a complete refurbishment in 2003/2004. The exterior corner tower has been heighten, the foyers have been enlarged and new sidewalls of auditorium hide the original decoration, which is preserved, due to the Grade II Listed status of the building. The hit musical "Mama Mia" transferred from his other theatre, the Prince Edward Theatre. This was followed by “Book of Morman”.

A set of photos taken before, during and after the rebuilding in 2003 can be found here:–

Great Photos Ian, is this the theatre The Beatles performed for the Queen in 1963?

Some 1990 photos of the Robert Cromie interior here:–