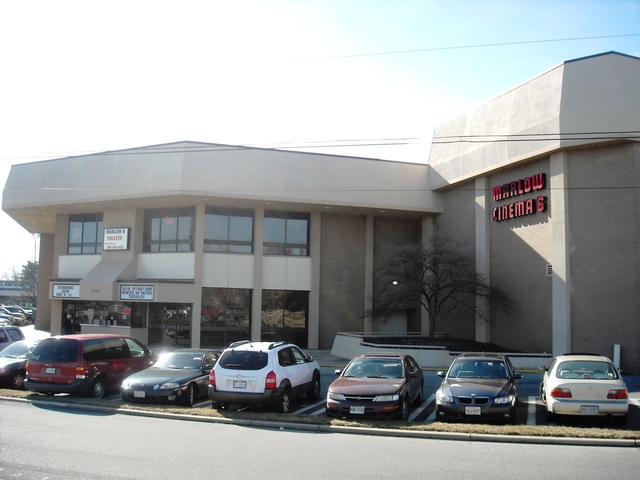 The Marlow Heights Theatre opened November 1, 1963 with Doris Day in “The Thrill of It All”. It was operated by the Wineland Theatres chain. The 927 seat venue was designed by the Silver Springs architectural group of Loewer-Sargent and Associate.

In 1977 the auditorium was split down the center to create two cinemas and in 1985 the total number of screens was expanded to six.

It was taken over by Phoenix Theatres Entertainment on March 9, 2012.

My aunt lived not far from the Iverson Mall and the local theatre.

The theatre exterior is vintage 1970s architecture and quite impressive. Although I didnâ€™t have a chance to get any interior shots, I did manage to get a couple of the exterior: 1, 2

The Marlow opened on 11/1/63 with THE THRILL OF IT ALL, starring Doris Day and James Garner. This film had previously played for over 11 weeks at the Dupont!

This theatre is list under locations of Loews-Cineplex I do not seethe connection,anyone know?

I usually go to this theatre location because of the convenience. Over the years it has changes ownership but the quality of it service remains poor. I believe the owners feels that their clientele doesn’t deserve better so they don’t deliver better. The last time I was there it was so cold and uncomfortable I shivered through the entire movie. The inside of the movies felt colder than being outdoors in the elements. It is always freezing inside. The only thing I trust eating are the pop corn

This is a nifty little site (Cinema Treasures). I must have gone to the Marlow Heights theater many times, though the only visit I remember distinctly was for the movie “Krull” (1983); it was in the summer just before I started high school.

It’s been many years since I lived in the area, but in response to the first post here—though I’m quite late in replying—I have to say that Iverson Mall had only two anchor stores: Woodward & Lothrop, and Montgomery Ward (there was never a JC Penney). Woodies went out of business in 1995 (a real shame), and Ward’s some time later (not such a shame). Both these stores had two floors, but I think that Ward’s was replaced by two stores, one for each floor. Also, I’ve never heard of this shopping center referred to as “the” Iverson Mall, just Iverson Mall, and I apologize if this is over-picky.

I have been patronizing this theater for years. It has transition through several different management teams. Although not perfect and improvements are needed it is better than the past. I love the new prices but how long will this last? My biggest complaint is when renovations are made why is the bathroom always the forgotten factor? Doors hanging off hinges, no locks on bath room doors, no hooks on all of the doors to hang purses or coats, above all the water pressure for flushing the toilets is horrible. Definitely needed attention to the bathrooms. I purchased a hot dog one time that was precooked and wrapped and had to returned it because I was 72 at the time and the hot dog looked older and dried up than me. The individual theater environment like the seating, sound, and image quality is comparable to other movie theater locations for $5.00. You can’t beat that price. I always bring a light jacket to the theater with me but there have been time when I felt like I needed a winter coat and a space heater to keep me from freezing.