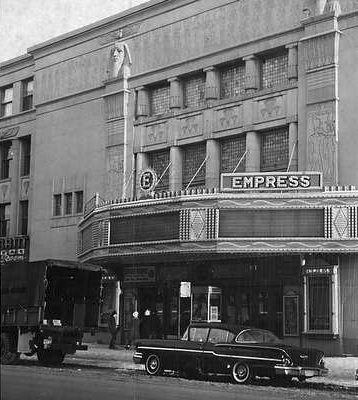 Opened on 19th May 1928, the Empress Theatre was taken over by Confederated Amusement in 1959 and was later bought out by United Theatres. It was designed in an Egyptian style (the only one in Canada) by architect Alcide Chausse and the splendid Egyptian interior was the work of interior designer Emmanuel Briffe.

In 1962, the theater stopped showing movies and it became a cabaret called the Royal Follies. In 1968, the theater was plained down and divided along the balcony and became the Cinema V playing first-run movies and Salle Hermes playing foreign movies.

In 1974, the theater briefly changed its name to The Home of Blue Movies.

In 1975, the policy changed to repertory and became the Montreal home of the cult classic "The Rocky Horror Picture Show".

Famous Players took over on June 17, 1988. Sadly, a fire damaged and closed the theater in 1992 and it never reopened again. Over the years several plans have been promoted to restore and reopen the theatre, but all have come to nothing.

Well here I am again, a year later, to the day. The December 2013 deadline for financing was missed and now been pushed back to October 2014. My best guess is it will be extended repeatedly throughout the next year or two until Cinema NDG finally forfeits their plans entirely.

Still no activity at the site as of June 2014. It remains boarded up, abandoned and deteriorating. Talk is one thing, action is another.

June 1st, 1974 grand opening ad as Home of Blue Movies as well as the La Press ad as “La Maison des Films Erotiques” can be found in the photo section for this theatre.

Update for 2017: Just as I predicted. Several deadline extensions were granted over the years (three in fact!), and each one of them missed. The city’s absolute final deadline was June 30, 2016, and when it was missed, it essentially nullified the whole project.

Cinema NDG did come back in September 2016 with a scaled back revision (knocking $2.5 million off the estimate total), but the city has shown no interest.

It’s now September 2017 and the theater restoration project is dead in the water. The only change is the building’s exterior is now covered in graffiti.

So as it stands, The Empress has now sat abandoned for 25 years. Yep, a quarter century of all talk and no action. I suspect it will be demolished, or at best, only the facade preserved for a condo project.

Looks it found some money. France’s MK2 (which have 9 cinemas in Paris) will operate it.

The Empress Theatre Foundation announced on Tuesday that the French film company MK2 has signed a letter of intent with them to run the cinemas in the project designed to revitalize the building at the corner of Old Orchard Ave. and Sherbrooke St. W. that used to house the Cinema V repertory cinema. etc…

Here is a link about MK2 http://mk2pro.com/en/notre-histoire/

MK2 is a potentially interesting development, but it’s hard to be optimistic with so many failed attempts by so many others in the past 25 years. As I’ve said in the past, talk is one thing…action is quite another.

I won’t even raise an eyebrow until/unless I see construction start. We’ll have to wait and see.

I flew my DJI Phantom at the nearby park and photographed the Empress. Aerial in the photo section.

Well, the latest news (as of August 2018) is MK2 has cut ties and canceled its agreement with the Empress Theater Foundation. This has essentially scuttled the project, it is now dead in the water. Again.

In the meantime the building has reached a critical point in terms of deterioration, the longer it sits abandoned to the elements, the more difficult and expensive it will become to renovate (at some point it just becomes a lost cause). My fear is its in danger of facing demolition.

It and the Cinéma de Paris downtown joined Famous Players on June 17th, 1988.

This will likely be the last major update. As of March 2020, the city announced it will demolish the Empress theater. An architectural audit states the building is structurally unsound and deteriorated past the point of saving. There is a chance the neo-Egyptian facade could be preserved, but it depends on cost and structural feasibility. Regardless, the building as a whole will be facing a wrecking ball in near future, maybe even the facade with it. Condos will be replacing it.

I saw this coming 10 years ago, just scroll to my 2010 posting and see. Yes, I called it way back then, demolition by neglect. It’s an age-old story repeated in Montreal over and over and over again. Incredibly infuriating and sad, but no surprise.

I’ll post a future update as to whether the facade was saved or not. Hardly a victory even if it is, the real treasure was the building itself, not its exterior face.