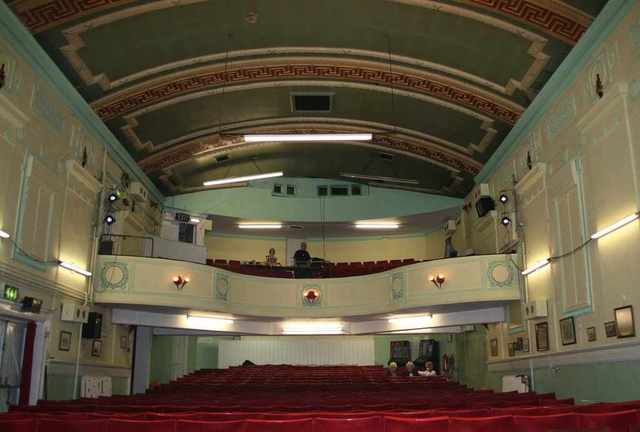 A cinema owned and operated by the Caerphilly Miner’s Welfare committee. It opened in 1925, with 650 seats all on one level, the auditorium was small. Originally the proscenium was 18 feet wide, later this was expanded for CinemaScope to 34 feet. The projection equipment consisted of Kalee 12 arcs and Kalee 11 open sound heads. The sound system was Westrex. Attached to the cinema was a reading room and lecture hall.

The cinema closed as a full time operation during the late-1960’s with occasional film shows throughout the 1970’s, competing with the Castle Cinema a little further along the same street.

Alongside the cinema was the traditional workingmen’s club, a reading room and snooker hall.

The building still stands today and functions purely as a workmen’s club with bar. In 2009 the building is available for sale, plans have been submitted to convert the premises to a memorial tribute/museum for comedian Tommy Cooper who was born in the town.

This hall was not in competition with the Castle Cinema after 1958 as both halls were owned by the same Miners' Welfare Committee. The offices of the Welfare Association, post 1958, were located at the Castle Cinema on the right hand side of the main entrance. The secretary and de facto overall director of the Miners' Welfare Association (circa 1960) was a gentleman named Dai Waters.
The Workmens' Hall was built and paid for by the Miners' Welfare Association on what can only be described as a shoe string budget. Its box equipment was basic , consisting of two Kalee 11 heads with Regal Arcs plus two dimmers controlling house lights and footies.
The equipment was simple to operate and for this reason only one projectionist was employed.The neighbouring Castle Cinema was more demanding and required two projectionists to provide a quality performance.For many years the sole projectionist at the Welfare was a gentleman named Mal who was a local legend, amongst jobbing projectionists, as far as his crash presentations were concerned.

Both the Castle and the Workmens' Hall had maintenance contracts with Western Electric.In 1960 the local engineer was a rather aged person named Mr. Totterdale – known to all as “Taff’s Well Totty”. He had been working with Kalee equipment since his youth and was believed to know more of the ins and outs of Kalee’s antique machines than anyone else in the business.
The reading room and other institute offices were very small, being located at the rear of the hall in a block that backed up to the screen. The institute possessed a separate back entrance which did not connect with the front cinema entrance. The most popular welfare facility was the reading room which displayed a range of daily newspapers and magazines plus boasting excellent heating in the winters.It was a popular destination for retired miners to chat and cough their winters away whilst awaiting the daily visits of the local bookies runners.

The Workmens'Hall probably contained some of the most uncomfortable seats in cinema history. The front rows of the stall area were formed of metal framed seating that possessed wooden backs and bases. Patrons spending two hours on one of these seats were rumoured to come out of the hall looking like cripples.
It was only the introduction of part time bingo that finally led to the replacement of the notorious ‘Death Seats’ with more comfortable , albeit, secondhand seating.