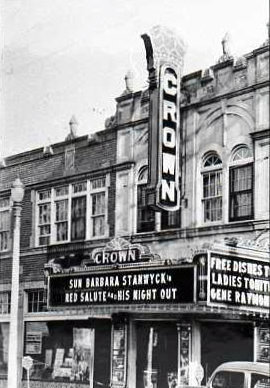 This little-remembered neighborhood theatre on Racine’s near-southside was operating by 1929. It kept its original look into the 1960’s though it had apparently closed in 1954. The titles of its final film program - "War Arrow" and "The Little Kidnappers" - remained poignantly posted on the original marquee for at least ten years thereafter, as though the owners had just walked away from it after that offering.

By the mid-1980’s the facade bore little trace of its original purpose and the building’s various stores and suites remained occupied until the entire block was cleared. Its history seems largely lost but I’m continuing to dig.

(Racine Journal-Times, October 14, 1964)
Convert Old Crown Theater into Stores, Apartments
Property at 907-911 16th St., including the Crown theater, closed and vacant for more than 10 years, is being remodeled into apartments and office space.
Remodeling is underway on the theater area, offices and two apartments. Frank Eby, owner of Eby Drug Co., 1600 Center St., who bought the property in June is seeking a change of zoning on the property to enable him to construct an additional apartment. Eby said the theater will be cut in half and that he will move his drugstore operation into one of the halves. The move will triple his space to about 3,600 square feet, he said. He has 1,400 square feet in his present location. Eby said the Grace Meany Corset Shop, presently located at 823 16th St., plans to occupy the other half of the theater. He added that he is not sure how much additional office space will be constructed. Eby said he hopes to have the remodeling completed by sometime next spring.

It appears the CROWN’s last program of “The Little Kidnappers” and “War Arrow” opened on Friday, April 22, 1955.

Steve Dorece, 1017 Sixteenth St., passed away August 9, 1947 at St. Luke’s Hospital. Mr. Dorece was born in Poland and had lived in Racine for the past 35 years. He was owner and operator of the Crown Theater on Sixteenth St. and was the oldest theater operator in the city. He was a member of St. Stanislaus Church.
Surviving are his wife Isabelle; one son, Leonard; and one grandson, William.
Funeral services were held from the Hanson Funeral Home and at St. Stanislaus Church, Rev. John J. Bonk officiating. Burial in Graceland Cemetery.

The entry for Racine architect J. Mandor Matson on a list of theater architects in the April 28, 1928, issue of Exhibitors Herald and Moving Picture World includes the Crown Theatre among his recent works.

March 12, 1927 grand opening ad for the Crown Theatre in photos with the opening film of “The Ace of Cards.‘” The theatre appears to have closed after the July 19, 1953 showing of “Flat Top” and “The Blazing Forest” along with six bonus cartoons.

“Mr. Dorece served his country with the United States Army during World War II. While he was stationed in Italy, he was commissioned to operate the Goldoni Theater in Livorno, Italy because of his theater background. Although Mr. Dorece retired from American Motors in 1981, he will most be remembered for his work as the Owner and Operator of the Crown Theater, which was family-owned and operated until it closed in 1955.”