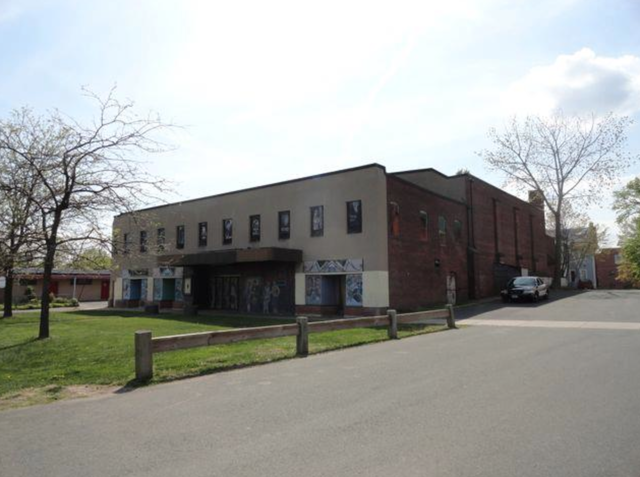 The Strand Theatre in the Enfield area of Thompsonville, opened in 1937. The entrance foyer and marquee were remodelled in 1948 to the plans of architectural firm William Risemen Associates. It has been closed since the late-1970’s. The Save Our Strand group had been raising money for years to renovate the theater, however nothing ever seemed to get done.

“I visited in June 2002 and the building looked as if it was about to collapse. Parts of it already have. I highly doubt it will ever be reopened.”

I’m from Enfield. According to one of my history teachers, the Strand used to be huge in the 40s and 50s. Due to budget problems, they tried showing X-rated films in the 70s as a last resort. They finally had to close. There is the “Save the Strand” group, but they seem to have fizzled out.

I am very interested in trying to get this theater off the ground again, but I just need some contact info or perhaps a means of raising money. A revival of this theater could do wonders for the people of Enfield.

CAN THEY SAVE THE STRAND?
ENFIELD — Inside the dark, dank interior of the Strand Theatre, you have to be a dreamer to see its possibilities. But a small, dedicated group of Strand-lovers in Enfield is composed of both dreamers and doers.

They want to re-create the Strand’s solid, imposing beauty, and make it available for children’s plays, community theater, concerts, lectures and even movies.

The theater, which opened Sept. 30, 1937, was once the entertainment cornerstone of the busy Thompsonville neighborhood. Hundreds of residents still recall its inexpensive Saturday kiddie matinees where 20 cents bought an afternoon of escape and adventure.

In later years, an operator showed adult films there, but the Strand has been dark and boarded up for about the past 15 years. With limited parking and no easy-on, easy-off highway access, the Strand is a throwback to a time when people walked to neighborhood theaters to see their movies.

Around the state, most of the grand, old theaters have burned or have been torn down. Hartford alone had 13 theaters and movie houses, which have all been demolished. New Haven rescued the former Roger Sherman vaudeville house, renaming it the Palace Performing Arts Center, but Middletown lost its Palace Theater to fire in 1980.

In Enfield, the Strand slid into decay during years of frustrating negotiations with the theater owners. Finally, on Oct. 1, 1996, the preservation group bought the theater for $55,000 from the Perakos family, who once owned a large chain of small and medium movie theaters up and down the East coast.

Now the challenge of fund-raising on a large scale is beginning as the group seeks to restore the movie house and turn it into a real theater, perhaps on the order of the popular Goodspeed Opera House in East Haddam, a shining jewel known today primarily for its musical theater.

“I’m feeling very positive. I think we have seen the very strong support from the community,” said Gerald Fitzsimons, the group’s chairman. “Obviously, the first step is to get the building functional.”

He said that while no firm estimates have been obtained, it will probably cost about $1 million to refurbish the theater. About $25,000 has been raised in donations or pledges, and a private donor has agreed to lend the group $55,000 to pay the purchase price.

He said the committee is looking into state grants as well as trying to recruit volunteer labor to reduce costs, but so far fund-raising has been difficult, even to find the money to buy the building.

Drafting students from Porter & Chester Institute in Enfield are drawing up plans and measurements, and the architectural firm of Russell Gibson von Dohlen, now called the S/L/A/M Collaborative, of Glastonbury gave the group a bargain rate to assess the building’s structure and mechanical systems.

There is so much to be done. The marquee needs to be rebuilt, and the dark green-black marble in the lobby restored. The stuffing is falling out of the 700 cherry-red seats, and some are wet because there are holes in the roof. Fallen plaster and rotting, ripped carpet make the floor treacherous, and there are puddles of water standing in the right aisle. The curtains on three sides of the interior walls of the theater are not velvet, but a rough red fabric covering the decorative paintings underneath.

But the columns on either side of the stage seem solid, and the fancy wood carvings of leaves on the proscenium arch reveal an attention to detail and beauty rarely found in modern buildings.

High above, the molding around the ceiling is fancy, in a style not repeated in modern theaters showing Hollywood’s latest efforts. Paint peeling from the double-vaulted ceiling reveals paintings the group plans to restore, but in the gloom, it is impossible even to make out their outlines.

The solid cherry paneling of the upstairs offices, now dusty-white with mildew, can be seen by flashlight. But architect-builder Randy Daigle, who heads the Save Our Strand building committee, says the wood has not buckled, and can be stripped, waxed and restored to its orginal sheen.

Inside the projection room, two water-cooled projectors appear ready to screen the latest Clint Eastwood film, but there is no electric current since the electricity has long been shut off. When Fitzsimons talks of renovations, he means starting over again, with new heating, new electrical work, new plumbing and a new roof.

It is a big job, but Fitzsimons and Daigle and others on the committee say it can be accomplished.

“We knew it was a big job going in,” Fitzsimons said. “The more we talk to people, the more we believe it is doable. We expect to move forward ASAP.”

does anybody know how to contact anyone that has any say in the strand?

This does not sound like the most viable of situations.

I remember seeing movies as a kid at the Strand. It was in the middle to late sixties, Iâ€™d go with my five brothers and sisters every weekend. The price was seventy five cents and weâ€™d be there all day. I miss those days! It is true life is so much easer when youâ€™re young. I donâ€™t think it will ever be renovated, but if it was make it for the kids.

it seems like no one cares about this AMAZING theater. I want to save this theater before someone destroys it. im going to help raise money for it I love this theater even though ive never seen it on the inside.

This reopened as Enfield Cinema on December 23rd, 1966. Grand opening ad in the photo section.