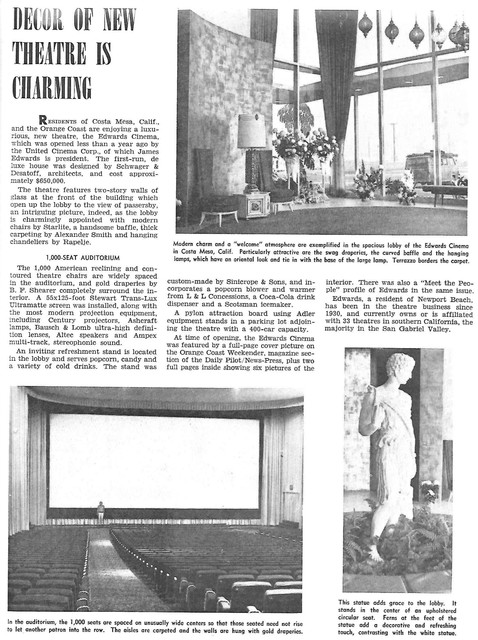 James Edwards II retired to Newport Beach, California in the early-1960’s after building up a chain of theaters around Los Angeles beginning in 1930.

Mr. Edwards came out of retirement in 1963 to open Edwards Cinema, which was the first theater in his modern-day empire. He convinced the film distributors that a growing Orange County could compete with Los Angeles for first-run movies. The Orange County Register reported that he guaranteed $75,000 to MGM in 1965 to screen “Dr. Zhivago” at the same time as Los Angeles. Soon other chains such as United Artists, General Cinemas and Mann Theatres took notice and begin to encroach but Mr. Edwards seemed to stay one step ahead of them, sometimes even buying up their locations when they called it quits.

But to paraphrase the modest Mr. Edwards, who lived until the age of 90, “We’re not really in the movie business, we’re in the popcorn business” The chain would go on to have at its peak in 2000, according to Boxoffice Magazine, 850 screens at 90 locations making it the 11 largest chain in the United States.

The original Edwards Cinema closed in 2000 because of Edwards' bankruptcy and the fact that the single-screen theater had become outdated. The remaining theaters are now part of Regal Entertainment Group. The renovated building became home to a Paul Mitchell cosmetology academy which closed around 2007. It was demolished in 2013/2014

I used to attend this theater often when I was in high school and beyond. It was also the workplace of a girl I adored for quite a whileâ€¦Stephanie Shumate. She lived close by and was an usher there her senior year and then on breaks from college. She would oftenâ€¦ after seating peopleâ€¦ come back and sit with me when she was off for the night. It was a nice large comfortable venue and it had a wonderful restaurant across the street called Cocoâ€™sâ€¦so in a small area you had the makings of a nice time with a date. This theater had by far the most comfortable seating in the city at the time.

QUOTE: “The Orange County Register reported that [James Edwards] guaranteed $75,000 to MGM in 1965 to screen "Dr. Zhivago” at the same time as Los Angeles."

I’m not sure how the above statement can be true since the Orange County first-run roadshow engagement of “Doctor Zhivago” (1) did not begin until February 1967 (14 months following the Los Angeles premiere), and (2) was booked into a theatre operated by Statewide, an Edwards competitor.

I saw Jaws here when it was released in 1975. I was afraid to dangle my legs off my bed at night for years afterward. Music Market was a killer record store across the street. I remember the Coco’s as well as the Hamburger Hamlet. I attended St. John the Baptist School on Baker Street at the time. Such great memories from those days.

I worked at the Edward’s on Adams in 1971 and 1972, as an usher, concessions girl, and then in the box office. It was a great place to work. We were paid $1.35 an hour, 30 cents below minimum wage as it was called a student wage, but the benefits were great! passes to other Edward’s Cinema’s, popcorn and soda to drink, and got to see the same movie many many times… i learned to appreciate just about all genres for something: the cinematography, direction, acting, music, or action.
Our manager was Roy Bruder, aged 72. He was avery kind man, but quite professional. He told us how as a young man he had worked at the Chicago theatre during a time when Mary Pickford was an active star. He made jewelry, and would give us small items as gifts. his night off was Thurs., and those were the evening we would let our friends come in. We had to disturb people who were making out in the back rows..shine the flashlight on them. We used to play tag on the ceiling of the theater with our usher flashilights. Motion Picture Academy members would come in to review movies, show their cards, and get in free. One time he was upset that I sold a ticket to Andy Devine, who came as a regular customer just to see the movie…he came over to get the $3.00 back to return to him.
We had a lot of fun. One time , during the ‘Out of Towners" with Jack lemmon and Sandy Dennis, the projectionist somehow missed a whole reel.. the show was over 20’ early. the customers did not notice, but as we saw the show over and over again, we sure did! “Le Mans” with Steve Mcqueen had so little dialogue we could memorize it.
Tickets were $2.50 for regular, and $3.00 for the loge seats in the back. it was a great place to work. We had a lot of fun, and saw great films. i had to be away for an extended time once or twice, and I had to quit but he was kind enough to say he would rehire me, (and he did), when I returned. Very fond memories.
People are really missing a lot by not seeing films on the old 70mm screens. i took my son to see the new Indiana jones movie (he is 27) last year at a theatre which has the big screen.. these poor kids have never seen the true effect film can have in these poor mulitplex theaters. Terry Spraitz Ciszek

A full-page item about the Edwards Cinema appeared in Boxoffice of October 19, 1964. The theater was designed by the Orange County firm of Schwager & Desatoff (Lester H. Schwager and Alex Desatoff.)

I went to this theater one time in 1999…and it was a very memorable night! A whole bunch of friends from my church singles group decided to get off work early and go see Star Wars Episode I: The Phantom Menace on opening night. We all got there early, grabbed dinner at the Yoshinoya across the street, then sat in line for a while eating dinner so we could be first to get tickets. It was just a fun evening out for a bunch of friends who were Star Wars geeks!! I also thought it was totally cool there was an old school single-screen theater still around. I agree with the other comments: The seats were VERY comfortable and the old 70mm screen really made the movie even more memorable…that and grabbing pizza at The Pizza Haus afterward. Great memories!!

Great memories, Kyle. This was one of my favorite theaters growing up. Cinema Center across the street was awesome too! The last time I saw a movie at this location was in 1996… it was the Hellraiser set in outer space, I believe it was called Bloodline. I have to say, the theater was in pretty bad shape at this point. I wonder if they spruced it up for Star Wars. If memory serves they closed it shortly thereafter. Anyway, glad to see other movie geeks showing love for Edwards.

Joe Vogel, I would love to read the article you mentioned, but I looked through the entire October 19, 1964 issue on boxoffice.com and didn’t see it. Are you sure about the date?

flatford: Its been a long time since I posted that now-dead link, but I pretty much always tested my links and then fixed them if they didn’t work, so that probably is the right date. Boxoffice published several different regional editions and a national edition of each issue, though, and it’s possible that the copy they had on issue.com in 2010 was different from the one they now have on yumpu.com. I find yumpu impossible to search either internally or from outside, so I haven’t seen the copy that is there now.

I’m also fed up with Boxoffice, as it has broken its links three times since it first put its archive online. I should probably just delete all my comments with broken links to that magazine in them, but I’ve never gotten around to it.

Based on views of this location on Google Maps Street View, the original building, which had been converted into a Paul Mitchell hair salon, was no longer functioning as a hair salon, or any other business, for several years, from 2007-2011 or thereabouts. It appears to have been demolished sometime around 2013 or 2014, as a Street View from September 2014 shows a newer building with a different footprint, and some of the tenants, including restaurants such as The Kickin' Crab and, as of June 2017, a Korean restaurant called Bonchon, both of which are still there.

There appears to be nothing indicating that the first Edwards movie theater in Orange County had once been located here.