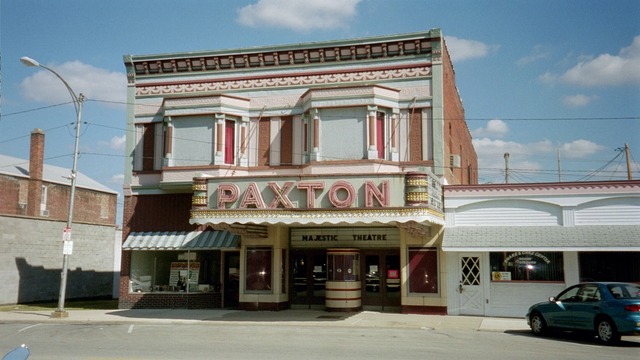 Opened in 1913 as the Majestic, this was the town’s largest and most impressive theater when it opened, seating just over 350.

Its was designed by the firm of Mesar, Hunt and Sullivan for A.B. McCollum who owned a handful of area theaters at that time.

The Majestic Building contained not only the theater, but storefronts as well. Some of its interior plasterwork and metalwork was based upon that seen by the architects in a downtown Chicago theater.

The theater originally presented both vaudeville and concerts on its tiny stage, in addition to movies.

The last vaudeville act at the Majestic was in 1929. In 1930, the theater was wired for sound films, after being closed for about a year for remodeling. Also, when the theater reopened, it had a new name, the New Paxton Theatre (the original choice for the new name was the New Wonder Theatre, but changed at the last minute). A new marquee was also put up around this time.

Not long after the name change, another name change occured, this time as the Paxtonian Theatre.

In 1935, air-conditioning was installed and by this time, the theater was called simply the Paxton Theatre, the name it would continue to be known as for nearly five decades.

In the 50s, Cinemascope and Vistavision films played on the Paxton’s screen.

By the end of the 70s, however, business was falling off at the theater, despite blockbusters like "Rocky" and "Star Wars" having successful runs there.

Its new owner in 1983 attempted to lure in new patrons by remodeling the aging theater, installing new seating and restoring the marquee, but within a year, the Paxton was closed.

For many years the Paxton Majestic hosted live performances, as well as children’s theater, dinner theater, and film screenings, but was closed in 2005. Sadly, the theater was burned to the ground in a blaze on November 13, 2007.

Thanks — it’s much appreciated. I love the passion for this theater, but we’ve been getting some complaints about this page recently. Happy Thanksgiving and thanks for your understanding. :)

Thanks a bunch, Ross. Happy Thanksgiving to you and your Family!

Hey Scott, Do you know where I could find the blue prints to the original building? Are they still in existence? They should be public right? I also want to apologize for calling you an idiot and contributing to the childishness. I am the youngest one on here but I know better than that.

For Thanksgiving, THANKS to Ross for hopefully putting an end to the trash that keeps showing up on this Paxton site. I live in Manteno 55 miles north of Paxton. Every one of the 86 times an entry is made on this site, I read it to see what is going on in “my neighborhood”. Most times I think of that quote you show biz folks in Paxton must know, from Meredith Willson’s “The Music Man” when Mayor Shinn states
“WILL YOU MEMBERS OF THE SCHOOL BOARD QUIT BICKERING IN PUBLIC?!"
I would have liked to have read about taking the letters from a production a couple of years ago off of the marquee, or comments about Paxton Foundation Vice President Judy Jensen-Popel (no relation) in the Kankakee Daily Journal 10/21/2007 "Next on the preservation wish list,is the Paxton Theater building, we are worried about it, noting that the south wall needs to be tuckpointed and the roof needs repair. (not that it matters now)
After the fire, the impression was left on this site that it was deserted and that arson was for insurance. It could have been arson, but I don’t know if we know that yet. In fact the building as I understand it, had 3 occupied apartments, the 4 tenants got out safely but of course were left homeless. Also the bookstore was completly destroyed, the owner was safe, but of course out of business. I don’t recall something important as human life not even being mentioned here.
IMHO this site should stick to facts on reports on what caused the fire. Goldern memories of the theater. Reports on a Paxton II.
Paxton Theater R.I.P.

Hi Renea. I am not aware of the existance of any original blueprints. That is why I had taken elevation photos of the building and shetched out a floorplan. However, way back when, a company called Sanborn Maps, sketched out a lot of downtown buildings for the insurance industry, as all the downtown buildings were tied it to a city steam pipe that originated right next door, within the old water tower complex. Some of these sketches may be attached to the property abstract. I think that would be a good start, to find the originals. I’m on it. As far as public record goes, there is only a rough exterior sketch of the building, available at the courthouse. I wish it was manditory to fill such plans away. The Majestic Paxton Theatre was last TOTALLY remodeled back in the early ‘70s, I beleive. Contractors that had worked on the building at the time must have had a guide. Of course, I know the owner at the time loved to do a lot of his own work. Houston Plumbing comes into mind as a possible contractor. I had just moved, and a lot of my drawings,
documentations and photos need to be “excavated” from all the boxes
(: I will share anything I have, with you. I truly appreciate your apologies, Paxton is very lucky to have you!

There were tons of people worried about the building. Why did no one step up and take charge? I couldn’t do it as a teenager with no money. It is very sad that this has happened. What is being done for those who lost their apartments and belongings? Why was Albert Sutton never a more prominent influence in the workings of the theater? I only heard of these things growing up. I saw that the group could not do much for the building because they were not the owner. I could never see past that though. What will happen to the lot now? Are there plans to put something else there? Was the book store in operation?

What a nice tribute on www.americanmarketstreet.com . Thanks.

This comment is to those who have made themselves feel important by hurting someone else…
My questions are simple.
Who says it was an arson?
Is the truth based on the typical gossip of Paxton, or did the State Fire Marshal and the insurance companies tell you this verbatum?
What gives everyone the right to crucify someone that most have not even met or spoken to?
Where were all of these supporters of the theatre in the last 10-15 years?
When have any of you approached the current owner and discussed the grand plans that you have had?
Who came to the conclusion that it was right to upset the owner, his wife, his sons and his grandsons who have read this crap?
Instead of hurting people by such slander, maybe you ought to spend more time figuring out what to do with the empty lot that will be there after clean-up is done.
Quit bashing the owner (and hurting his family).
You say he is a landlord who didn’t care, I know for sure that he did love this building.
Three tenants lived there and lost everything and poor Charlie’s bookstore is gone, he has nothing left.
He was more concerned of their well being when the fire started and what they were going to do afterwards. All you are concerned about is what untruth you will speak, now that the theatre is gone.
How caring you all are.
I stood with him as he watched, in total and utter shock, when his awesome building burned to the ground. He was there everyday for at least a week after the fire.
I saw a lot of people up there the day it happened, but few were there when it was all said and done. Such support for a grand bulding that everyone “cared so much for”.
With all the money that was saved to rebuild the theatre, why don’t you donate it to the tenants who lost everything in the fire?
All in all, we lost another old building in town, our fire department saved a whole block of buildings, and the thing that I am most grateful for, no lives were lost.
Figure out that your words are painful for those listening. If the shoe were on the other foot…I guess you would feel the same way I do.

There is an early photo of the Majestic Theatre in the left column of this page of The Moving Picture World, July 1, 1916. The right column features a photo of Paxton’s other movie house, the Crystal Theatre.