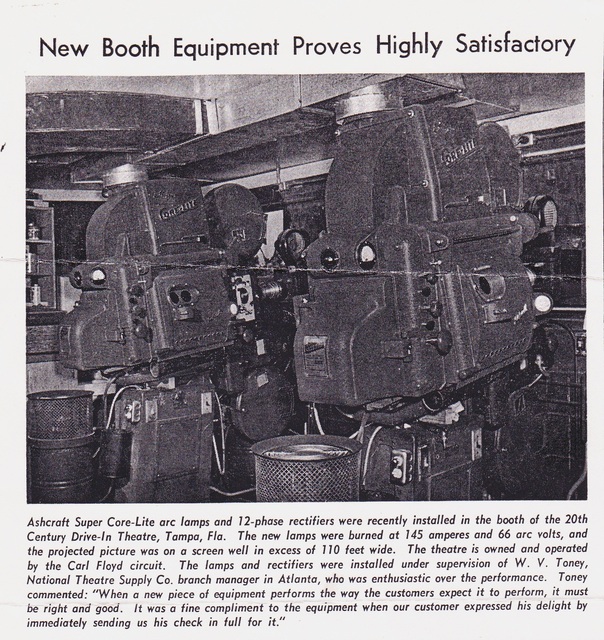 The 20th Century Drive-In was opened by 1955 by Floyd Theaters. It had a capacity for 500 cars, and 300 seating positions. Closed in 1979, it was replaced by an apartment building.

The screen at the Mustang had a curve to it. I lived in Tampa when it was open and than when it was a flea market. The 20th Century had a true wide scope screen even though when I first went to Tampa in 77 it was panavision projection.

I forgot about the curve but you’re right. The Mustang did have a curved screen. I think if you were to cut about a 4th off the top of the Mustang’s screen it would then be true scope projection.

These drive-ins in Tampa also had a curved steel screen installed that replaced their original screens: Dale Mabry, Skyway, and Hillsboro. The Dale Mabry and Hillsboro were 100-foot wide and the Skyway was 60-foot wide. These screens were also tilted slightly downward at an angle aimed towards the booth for a more direct projection throw and better viewing from ground level.

If you zoom in on the 1969 historic aerial at the link the NYozoner posted, you can see just below and right of the Dale Mabry entrance marqee, the Biff Burger restaurant so popular with the drive-in patrons. You can even see the striped rooftop. Immediately behind it (to the right), is the triangular shaped playground.

I hadn’t noticed it in the aerial before but you’re right. I see the Biff Burger and the playground behind it. On several occasions when I couldn’t convince my parents to go to the drive-in, I had my father drop me off at Biff Burger. From the playground you had a nice view of the screen. Sitting on the swings I watched as the cars lined up at the box-office wishing I was in one of them as they entered the theatre. Although you could barely hear the movie from the playground it was the next best thing to actually being inside the drive-in!

neat story, I stood outside in the parking lot and watched movies while my mom shopped at Forest Hills Drive-in, guess a bunch of kids did this.

It was not replaced by Kmart it was replaced by Apartment complex which is next to Kmart. back of drive In was on Himes. It was a wild time When Cheech n Chongs up in Smoke premiered there. Most people and Smoke I have ever seen in a Drive In….LOL

This opened on November 26th, 1952. Grand opening ad in the photo section.

Did this drive-in only screen 2Oth Century Fox movies?

Not that I remember