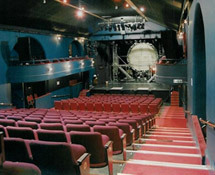 Located in two of the arches beneath Charing Cross Railway Station, in central London. Opened as The Arches in 1866, soon after the railway station opened in 1863. Initially it was a billiard room and a coffee room. It was the second music hall to be operated by the Gatti family, the first being in Waterloo, Lambeth, south of the River Thames in 1865.

It underwent a series of name changes over the years the Gatti family were operating the hall; Hungerford Music Hall(1883) when it was redecorated and a small baclony was added, the seating capacity was for 600. ‘Gatti’s’ under the Arches (c.1887), Charing Cross Music Hall, and ‘Gatti’s’ Charing Cross Music Hall. The Gatti family left the building in 1903, and it went through several unsuccessful attempts to keep going as a music hall.

In May 1909, it had become the Arena, used for boxing matches. Films were screened from 7th June 1909 and continued on nights when boxing wasn’t being staged. Alterations were made to the building by architect William Hancock, and a projection box was built in the balcony, which had been closed to the public. Soon films became more popular than boxing and it was re-named Arena Picture Theatre. With a seating capacity for 416, a new projection box had been built on the stage behind the screen and in 1918 it became the Villiers Cinema. In 1923 it closed and boxing matches returned. From 1924 until 1926 it became the Palais de Dance.

Re-opened on 30th July 1928 as a full time cinema after renovations, it had been re-named Forum Cinema, and again had a rear projection system. Many foreign films were screened, including Hedy Lamarr in "Ecstasy" which required a special licence, as it had been banned by the British Board of Film Censors. The Forum Cinema was closed in 1939 at the outbreak of World War II and it didn’t re-open. It was used by the Auxiliary Fire Service and then as a cinema equipment depot for ENSA (a wartime government department which organised entertainment for the troops).

In 1946, it was opened as the Players Theatre (Late Joys). Presenting old time musical hall it re-created the old Gatti’s music hall days, and was very popular. Forced to close in 1987, when a new building was erected above Charing Cross Station, it re-opened in 1989 but was closed in May 2002. It has now re-opened as the New Players Theatre, and stages ‘off-West End’ shows at competitive prices.

History and some memorabilia on Gatti’s and the Players Theatre:
http://www.arthurlloyd.co.uk/Gattis.htm