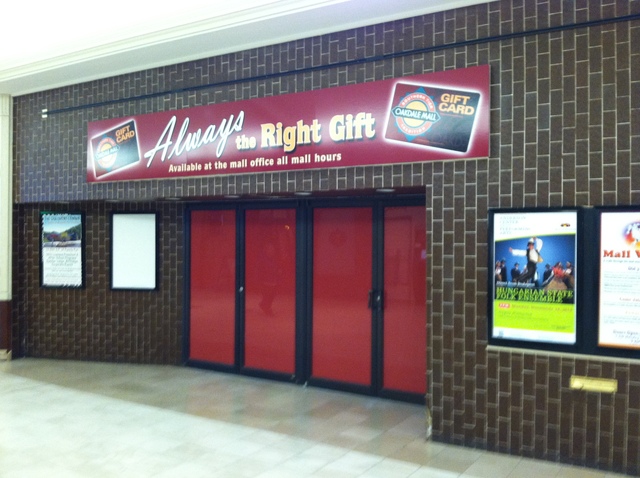 The Oakdale Mall Cinemas was opened by CinemaNational on October 29, 1975. Seating was 333, 294, and 289, and the entrance was inside the mall itself across from the Time Out Arcade. The theater was later operated by USA Cinemas then Loews until the mid-90’s. In its heyday the theater enjoyed a very strong business with lines out in the mall. An independent took over for a few years and closed the theater in the early-2000’s. It was last used as a 2nd run house. The 35mm projectors and platters went to the Cinema Saver in nearby Endicott after closing. The space was later gutted out and as of 2022, still is an empty space that is used by the mall for storage.

I was the manager of the Oakdale Mall Cinemas from 1990-1993. Theater 1 (333 seats) had a curtain that opened from the center, and theaters 2 (294) and 3 (289) had curtains that opened from left to right. It was the Bighhamton area’s busiest theater until Loews built the Town Square 9 which opened in November 1993. The Oakdale Mall Cinemas first opened in 1975. Loews was not the final operator of this house—when they gave it up in the late 90’s, and independent operator ran it for a bit as a subrun before giving up. The theater is still sitting there empty, used for storage by the mall. It is located inside the mall and is not a freestanding building.

I was a college student in Binghamton from 1981 to 1985 and saw many films at Oakdale. But my strongest memory from Oakdale was seeing a matinee of John Sayle’s Eight Men Out in the late 1980’s and being the only person in the theater. I just hope the other 2 screens had some customers at the time!

Gosh! I remember this theater well as a child. I walked here all the way from Conklin Avenue once. It was a big deal then. Probably my best memory of this theater was seeing The China Syndrome here and being interviewed afterward by the newspaper what I thought and how it related to the then on-going crisis of Three-Mile Island(I still even have the clipping somewhere!. I also saw For Your Eyes Only in the most crowded theater I personally have ever been in – just about every seat had been taken. I have moved away from Binghamton now for well over 30 years but am greatly saddened by the losses of so many great theaters. The times I spent in this and others was magical to me then.

This opened on October 29th, 1975. Grand opening ad in the photo section.