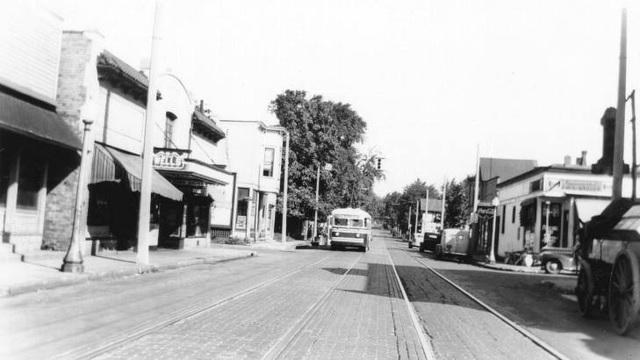 The Wells Theatre opened April 10, 1917, with seating listed at 275. It was remodeled in 1920. The theatre was owned and operated by the Maller Brothers.

The Wells Theatre closed in the mid-1950’s. By 2016 it was in use as office space for Koehlinger Kruse.

The Wells Theatre building was not demolished. It now has the address 1441 N. Wells Street and is occupied by Koehlinger Kruse Security.

I photographed the building as part of a survey of Wells Street for my web site, and thought it looked like a former theatre. I asked Don Orban, Historic Preservation Planner for the City of Fort Wayne, and he sent me this response:

“Your guess is correctâ€¦the Koehlinger Kruse bldg was indeed the Wells Street Theaterâ€¦see attached photo. Cinema Treasures is incorrect. The old Sanborn maps show the building as having addresses 1433, 35, & 37 (theater entrance in the middle and small storefronts on each side). Not sure how KK got the 1441 address but those seem to be subject to change over the years for a variety of reasons.”

The building stands at the southwest corner of Wells and Fourth Streets. You may see the photo that I took on April 12, 2010 here; it’s the tan brick building on the right:
Former Wells Theatre, Fort Wayne, Indiana

The Wells Theatre is listed in a Fort Wayne telephone directory published in December, 1924.

i was an usher at wells theater est.17 years old . 1944. borkinstein heating plumming owner. installed air conditioner at that time..10 cent tickets seating sloped down to the screen. later i ushered at the palace down town.

A house called the Palace Theatre is listed at 4th and Wells Streets in Fort Wayne in the 1914-1915 American Motion Picture Directory. Details being unavailable, I don’t know if this was the same house later called the Wells Theatre.

A second house called the Palace Theatre opened in downtown Fort Wayne in January, 1915. The 1916 Polk Directory lists both the “Palace, cor 4th and Wells” and the “Palace Theatre (New), Washington blvd E.”

Hree’s something from the April 3, 1920 issue of Moving Picture World:

“For a consideration of $20,000, B. Borkenstein, of Fort Wayne, Ind., has bought the Wells Street Theatre in that city from Edward Hammerle, and has leased it to his son, Alfred Borkenstein, who will assume active management at once. The theatre, which is devoted exclusively to motion pictures, is situated at 1435 Wells street.

“Following the purchase, Mr. Borkenstein announced that the building will be extensively remodeled. The complete interior of the theatre will be redecorated, a new fireproof operating booth will be constructed, and a modern ventilating system will be installed. The remodeling work will not be started for several weeks.”The building is currently listed for sale on LoopNet for a consideration quite a bit larger than $20,000.