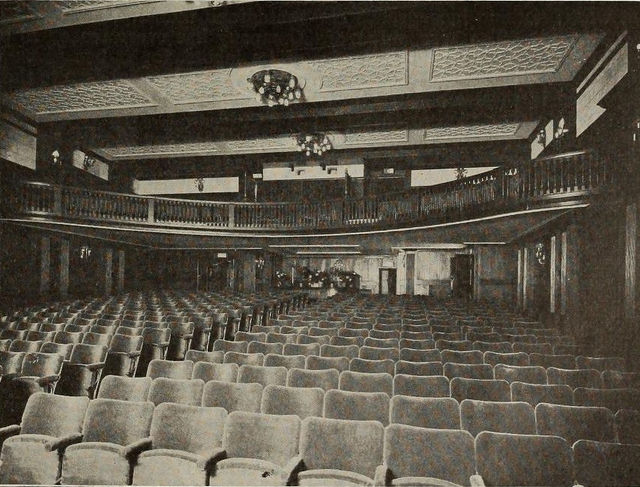 The Cinema House opened as a single screen cinema on 14th July 1910. Designed by architect Melville S. Ward in a Jacobean style, it had Oak panelling along the auditorium walls. Seating was provided for 500 in the stalls and 100 in the circle, which had a open front wooden balustrade. The narrow stone facade, had leaded glass windows above the entrance, that allowed light into the offices that were part of the building. In the basement was a restaurant, which later became the first ever Chinese restaurant in London.

In the early 1930’s, the Cinema House began to specialise in screening Continental art house films. It was taken over by the D.J. James circuit in the spring of 1934. In the autumn of 1935, the Cinema House was closed to allow construction in the basement restaurant, to convert the space into a second screen.

This was designed by the architectural firm Kemp & Tasker in an Art Deco style. The basement cinema had seating for 370 on a main floor, and raised side slips along the walls. The twin screen cinema re-opened on 7th March 1936, with the original 600-seat Cinema House re-named Studio One screening Annabella in "Eve of Battle"(Veille d'Armes) and the new basement cinema named Studio Two in use as a newsreel & travelogue cinema. Both cinemas were served by a central paybox, located on the street.

The cinemas closed in October 1940, due to war-time conditions, but re-opened on 13th March 1941. From 1942, Studio One began a policy of screening family films, when Walt Disney’s "Fantasia" began a season run, supported with revivals of different French films which changed every few weeks.

On 22nd July 1952, the intricate multi-coloured neon sign on the façade was switched on for the first time. Covering the entire façade, it became a famous landmark in Oxford Street for many years. The twin cinema was taken over by 20th Century Fox in 1968, and became the third West End outlet for the company’s films. While Studio One continued as a feature film house, the former Studio Two newsreel cinema was now screening non-stop cartoons and shorts (somewhere for the mums & dads to drop the kids off, while they did the shopping on London’s premiere shopping street). By the early-1970’s Studio Two was also screening feature films.

It was taken over by the Leeds based Star Cinemas chain from 9th December 1976, and they closed Studio One on 30th November 1977, to convert it into a triple screen cinema, Studio Two remained open during the conversion. The complex reopened on 23rd March 1978 with the screens re-named Studio 1 & 2 in the former stalls, each with 200 seats, Studio 3 in the former circle, with 88 seats, and the former basement Studio Two became Studio 4. All screens began playing first run films, concurrent with other West End cinemas. Unfortunately, the lovely neon display was turned off, and was never lit again.

The site value on busy Oxford Street became its downfall, and Star Cinemas closed the Studio 1, 2, 3, 4 on 8th December 1984 with "Conan the Destroyer", "The Bounty", "Maitresse" plus "Last Tango in Paris" in Studio’s 1, 2, and 3, and in Studio 4 "Romancing the Stone". The auditorium section was demolished in May 1985, and offices were built on the site, with an entrance on Hills Place. The entrance frontage and foyer space on Oxford Street became a Benetton shop. In recent years, this too has been demolished and redeveloped into retail space, in 2009, occupied by Mango clothing shop.

Nice shots KenRoe.How are things there?

A friend of mine was one of the projectionists here at the time of conversion to 4 screens, and I spent quite a lot of time visiting. The conversion was achieved in a stupidly short time, and the cinemas reopened whilst the projection area for screens 1-3 was effectively a building site – the floor was unsurfaced, for example! This resulted in the trashing of a brand new print of ‘The Goodbye Girl’ during it’s first two weeks of release, due to the amount of dust and grit still floating around in the atmosphere, which went down VERY well with the distributors. The positioning of the actual screen at the front of the former circle, meant that the projector had to be sunk into the projection room floor to get a straight throw at it. Although screens 2 and 3 were periscoped, as I remember, this wasn’t an option in the new Studio 1.

Studio 4 had been a swimming pool at some time during its life, and the projection room, which must have been the swimming attendant’s office, was still tiled accordingly.

The projectors in Studios 1-3 were new(ish) Westar 2000’s, Studio 4 being driven by a dual guage Westar 35-70mm machine from the Prince Charles, though it was never able to show 70mm in its new home. All screens had Westar longplay towers.

Of course, what I MEANT to say was that screens 1 and 2 were periscoped, and screen 3 was direct projected from below floor level. Sorry for the momentary aberration!

Here is an article about the Cinema House in the November 1, 1910, issue of the Chicago-based trade journal The Nickelodeon.