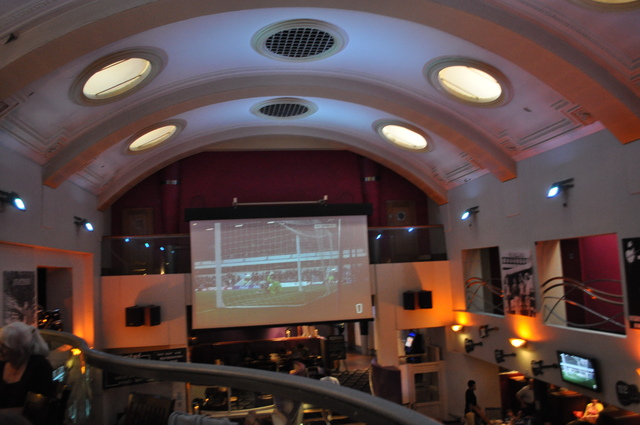 It was opened on 26th August 1911. Seating was provided in stalls and circle levels, and there were a series of three boxes along the side walls at both stalls and circle levels. It was designed in a Jacobean style and had an armour suit standing guard in the foyer. It was at this cinema that a member of the Royal family first attended a film performance, when Queen Alexandra came along for a special screening in 1911.

The cinema had a large basement and Pyke used it to store waste film. On 26th July 1915, an employee working with a soldering iron, set fire to the the highly flammable film stock and he died. The cinema was also damaged and was closed. Pyke was held responsible for his death and was found guilty of manslaughter at an Old Bailey trail. The consequences were a bankrupt Montagu Pyke, who sold all his cinemas.

The cinema was restored and it re-opened under new owners in August 1916, re-named Super Cinema. It now had a full orchestra and a pipe organ. In February 1928, the organ was replaced by a Compton 2Manual/8Ranks theatre organ. It was taken over by United Picture Theatres chain in November 1928, and they became part of the Gaumont British Theatres circuit on 25th December 1930.

From 16th February 1931, it was re-named Tatler Cinema, and became the UK’s second news and short subjects cinema, screening of course Gaumont British Movitone News as part of the programme. In 1938, the Tatler Cinema was one of several Gaumont owned cinemas that were used for experiments of large screen television transmissions using the Baird system. Later in 1938, several live television broadcasts were included in the regular cinema programme.

From 1941, until 1947, the Tatler Cinema programmed Russian films exclusively. In 1950, it was sold to the Jacey Cinemas chain, and after renovations, it re-opened on 23rd September 1950 with "Traffic in Souls", a white slave drama, which had been granted a local X-London certificate. It became the Tatler News Theatre from October 1951.

Re-named Jacey Tatler Cinema on 10th January 1966, it began screening Continental sex films, the first was "Fanny Hill". When "The Language of Love" was screened, the manager was arrested for screening an uncensored film. It was taken over by the independent Cinecenta chain in early-1977 and was closed with "Only in Denmark" and "Red Hot in Bed".

The cinema was converted into a triple screen operation, with two screens in the former stalls seating 143 and 160, and a 141 seat screen 3 in the former circle. It re-opened as the Filmcenta 1-2-3 on 17th February 1977 with "The Gatekeeper’s Daughter", "Andy Warhol’s Bad" and Clint Eastwood in "The Enforcer". Taken over by the Star Cinemas chain in December 1979, it began screening double bill programmes of recent hit films.

Star Cinemas were taken over by the Cannon group in August 1985, and it was re-named Cannon Charing Cross Road on 6th December 1985. Going back to single feature programmes it was closed on 7th January 1987 with "Big Trouble in Little China", "Psycho III" and "Betty Blue".

I was de-tripled and became the Marquee Club, hosting concerts. The building was taken over by the popular J.D. Wetherspoon chain of pubs and after refurbishment it opened as ‘The Moon Under Water’ on 20th December 1996. In recent years, it has been re-named ‘The Montagu Pyke’. The original barrel shaped auditorium ceiling is still to be seen, as are a display of a few photographs of the building as the Super Cinema.

A set of vintage photographs of the Cannon Charing Cross Road;
View link

A circa 1988 shot of the closed cinema, with the marquee still in place:–

Thanks guys for the pictures.

This is where I saw “Day of The Jackal”. The auditorium was very shabby and run down at the time.

Here is an article about the Cabridge Circus Cinema from the March, 1912, issue of The Cinema News and Property Gazette. There are photos of the vestibule and auditorium sporting their original Jacobean decor. 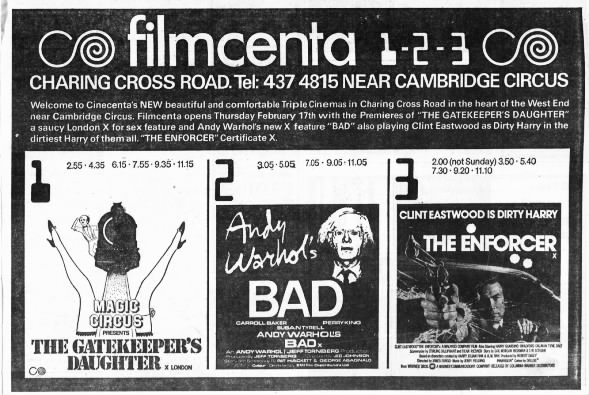