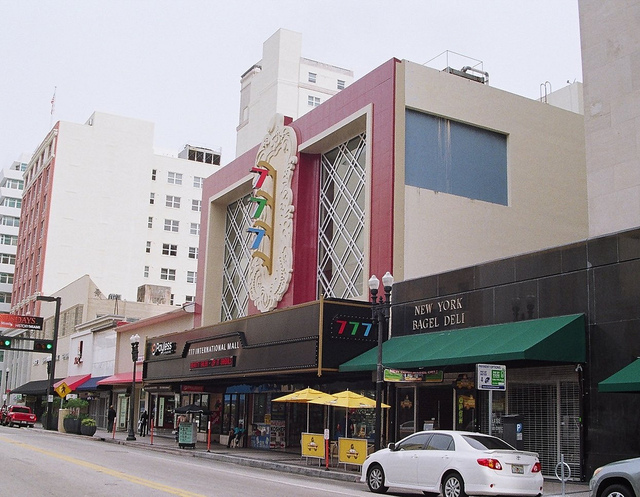 The Miami Theatre opened on April 18, 1947 with Dick Haymes in “Carnival in Costa Rica”. This stunning example of a Streamline Moderne (with tropical touches) movie palace was the work of the prolific theater architect S. Charles Lee, in collaboration with Robert E. Collins. Interior decorations were carried out by Frederick T. Rank, with murals painted by F.M. Bergere.

The Miami Theatre had a total seating capacity of 1,860, with 600 of these in the balcony. The lobby area gave the appearance of a giant fish aquarium. The theatre building included a restaurant which could be entered either from Flagler Street or from inside the lobby.

The Wometco chain closed the Miami Theatre in 1979, and it was afterward converted into a shopping center.

I bet that was a beautiful house. Great looking marquee.

Address should be corrected/changed to 145 E. Flagler Street.

A few years ago during a historic walking tour of downtown an older person told me what is now a perfume counter/store on the left side of the entrance extending into the lobby used to be the concession stand. … In a photo posted here on the photos page it looks like the concession was a little farther in, or maybe that’s what the person meant.

Ugh, another cinema (along with The Carib) where I feel like I missed something by not getting to see it in its day.

I would have liked to have experienced the several theaters on one street atmosphere, especially at night, like on Flagler Street or Lincoln Road, like cities used to have back then.

Does anyone know of a city street anywhere in the world that still has several open theaters operating in almost a row with their lit up marquees?

Links are now dead from my 2010 postings. New links below:

The Main Library in downtown Miami has a videocassette (VHS) copy of a collection of short documentary films made locally in the mid-1980’s called “A Few Things I Know About Miami”.

The first, about 6 minutes long, is called “On Flagler Street” featuring a man named Jimmy Barnett, a former manager of the Olympia across the street from the Miami, describing the heyday of the movie going experience along Flagler Street which he feels lasted from the 1930’s to about 1955. Behind him you can almost make out the then drab grey façade of the Miami Theatre in its yet-to-be restored state.

The film includes archival Movietone newsreel footage of the grand opening of the Miami Theatre (with the film “Carnival in Costa Rica” and mentioning that the manager was Sonny Shepard), the premier at the Miami of “Slattery’s Hurricane” which was partially filmed in the area, and actor Jimmy Stewart arriving at the premier of “The Glenn Miller Story” at what might be the Miracle Theater in Coral Gables (it simultaneously premiered at the Miami and the Carib). There are also historic still photo shots of various theaters in downtown Miami when they were open.

A b&w image of the Miami Theatre marquee is on the cover of the box that the videocassette comes in.

Here’s a tv news story from July 1978 on the Wolfson Archives Youtube channel about the Miami Theatre being turned into a mall, including some of the theater’s history and older archival footage. There’s also a short segment about the Rio Theatre:

I walked by the Miami Theatre location on 9/12/2018 and all the stores in the mall it had become were gone with the entrance gates closed. To the right of the main entrance was an exhibit of homemade political protest signs (“A Century of Dissent”)and to the left was a Dale Zine store, neither of which were open at the time. A young guy appeared who told me he believes the place will become a space for artists, before he let himself in with a key and closed the gate behind him.

The movie “Lady Ice” on DVD in Widescreen shows the Miami Theatre during a jewelry store hiest. The marquee name is draped over with a black fabric but there is no mistaking it for the Miami Theatre. The features are “MELINDA” with Calvin Lockhart & “Come Back, Charleston Blue” as the co-feature. In a long shot of the marquee across the street, a garbage trash bin says “KEEP CHICAGO CLEAN”! What a hoot… The movie stars Donald Sutherland and Jennifer O'Neill. (Filmed in 1972-1973). You can’t fool me, I know my theatres. The first time DVD release is available at your Brooklyn Public Library. See it, it’s fun.

When “LADY ICE” opened in South Florida it was advertised as ‘Filmed in Miami’.

“Lady Ice” is also available for streaming on Amazon. Free with Prime subscription.

One of the neon “Miami” signs from above the marquee of the Miami Theatre visible in archival photos such as this one and this one is the centerpiece of the “It’s a Miami Thing” exhibit at the HistoryMiami Museum that has been extended to September 4, 2022.

I have uploaded photos of it to the photos page from my visit to the museum.