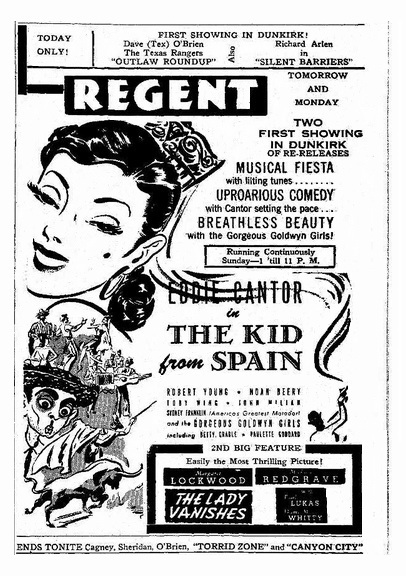 The Regent Theatre was eventually re-built in its current form, reopening Thanksgiving 1942. It closed in 1992. In the 2010’s it was being used for storage, but was vacated in early-2017.

June 8 1951 has “HALF ANGEL” playing.Evening admission is 55 cents for Adults; Kids 16 cents always.

Does anyone know who owns the Regent now? or if there are any plans for it?

The last I heard it is owned by the guy who own Kettle & Keg and Walleye Willies, both Lake Shore Drive, East in Dunkirk. I saw someone working on the place last summer with a dumpster out front for a day.

I believe I have found the clock from the Regent. Or something similar. It is in the Dunkirk Historical Museum, Washington Ave, on the main floor.

psomerf: Did you recently most on FB about this clock? Would love to see it so must head to the museum on Washington Avenue.

Also recall the nearby Catholic Church owns the former Regent Theatre building and uses it for storage. I think the seats were removed many years ago though its closing in 1992 wasn’t that long ago.

The building looks to be in sound condition and would make a great cinema again for the area as the cinema near the I-90 interchange shouldn’t be the only choice! Would love to know who, presently, owns this building!

Patsy: I may have posted on facebook. The church no longer owns the building, it is owned by the owner of Kettle & Keg. As far as it becoming a cinema again, I’m doubtful that that will ever happen. Last I heard Payne was seeking to take the slope out of the floor.

When I ate at K & K, Payne was usually there for the lunch rush, then left by 2 or 3. But that has been at least 2 years since I ate there that early.

I have heard rumors of a new (how long ago it happened to justify being called “new”, I don’t know) owner, with at least some interest in showing movies again. But that is third hand information, so I can’t vouch for its veracity.

The Regent theater, which had been used for storage, was recently cleaned out and sent to auction. March 14th I attended the RCS auction in Dunkirk on Lake Shore drive and purchased the Simplex theater speakers as well as the Kni-Tron rectifiers used to spark the ark lamps in the projectors. There were two cast iron projector bases with reel case, several bell shaped wall lamps and a few other items that also sold. Everything went cheap. I just resold the 1940’s era speaker cabinets to a collector in South Korea. I personally visited the theater many times all through my youth as well as the Capitol, Van Buran and Enterprise drive in’s, Cine 1 & 2 and the Jamestown cinema which is also gone. Saw many great movies in these places. Sad they’re all gone now.

I witnessed urban renewal which destroyed the tax base causing the remaining buildings to see their taxes sky rocket. High taxes are a business killer. Urban renewal also forced the carpenters unions of Jamestown and Dunkirk to combine in order to survive. I remember Ludlums toy store where my mother bought me my first Lego and then across the street to Kresge’s for ice cream and to pop the balloon for the discount. I happened to buy at auction a few years ago 8mm movies and Kodachrome slides of Dunkirk, the air show, the train wreck, parade, ice skating, etc. I remember all the mom and pop grocery stores and the good times at the point. Not much left of Dunkirk these days.