The Town & Country Theatre closed in 2000 when the Showplace 16 opened.

The building no longer exists. On the Google picture above, it was situated on the grassy lawn between the fast-food joints (to the viewer’s left) and the brick supermarket (right). The undistinguished entrance faced the strip-mall parking lot, in the distance; the theater’s back faced the street, in the foreground. The foyer offered little more than a refreshment stand. The theater[s] were basic single-level boxes. After the building multiplexed, patrons could sometimes listen to two or three sound-tracks simultaneously. This was not one of the great movie palaces of yore!

I worked at the Town and Country Theatre when it first opened in 1970. I was a freshman at IUSB. I worked there for two years. The theater was a fine example of late 1960’s single screen theatre architecture. It was a very large single screen theatre with seating for around 1078. The theater was designed using a great deal of glass, chrome and contemporary carpeting. Colors were very typical of this period and included a 1960’s blue grand drape with matching 4” thick oversized blue auditorium seats. The lobby was done in mixtures of orange and reds. I vividly remember the orange, vinyl covered chrome leg benches located throughout the lower and upper lobby areas.

There was a small, rather odd, second level designed to be an art gallery. Many patrons entering the theatre for the first time were convinced these open stairs had to lead to a balcony in the theatre. The entire front and sides were flanked in two story glass panels, which while very contemporary looking, caused a lot of problems during the daytime because the daylight would stream into the auditorium and wash out the screen every time the auditorium doors were opened. Another unique “innovation” was that the theater had no popcorn machine. ABC Theatres, the original owners, thought it would be much more cost effective to pop all the corn a week in advance, store it in bags and then just heat it up in a large warmer at the concession stand. The result was very stale tasting popcorn. The theatre never had a 70 mm projection system, but it was equipped with 35mm mag track stereo projectors. It was also innovative in that it used the newest Xenon lamp projectors rather than the old arc lamp design. It however still employed the two projector change over system, not the platter design that would be used in theatres built the in the following years. The screen was extremely large for its day. Another unique innovation was that the theatre used an automated motorized masking and grand drape curtain system. The movie screen itself was never exposed when patrons first entered the theater, but opened at the start of the film. Unfortunately many of these innovations began to fail within the first couple years of the theatre’s operation. I wasn’t around to see the theatre chopped into bits, but it was a fine example of the last of the single screen contemporary architecture, even if some of the design elements were flawed.

What you see in the Google photo BTW is the remaining exterior free standing marquee. One marquee sat on Hickory Road and the other on McKinley. While the theatre has been torn down, it looks like the exterior marquees remain. A third marquee was on the theatre building itself, and rotated inward for easy changing.

The description states that they added screens twice. This is slightly inaccurate. I don’t remember which order they did the modifications but they did add on to the building creating another theatre, but they also chopped the original theatre in half and made two screens out of it. I remember hanging the side wall drapes when the did the twining. As I recall there was some discussion of either making it a 70mm house with the nice big auditorium or cut it in half. Some much for a great movie experience.

This opened on July 2nd, 1970 as the Flagship Showplace of Michiana. Grand opening ad posted. More to come. 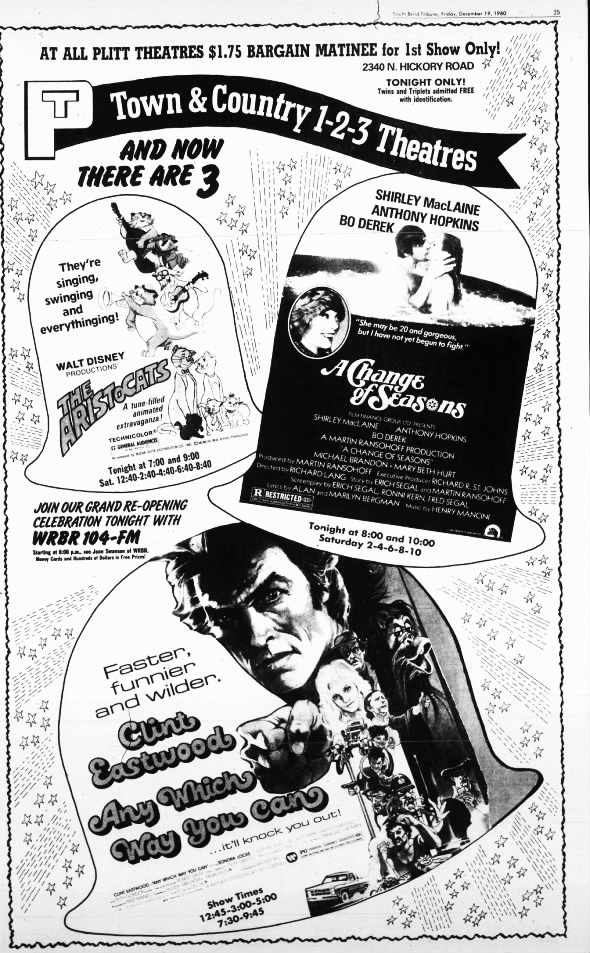