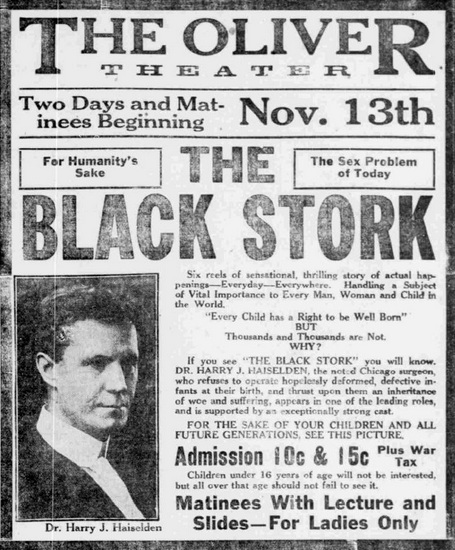 Built on the site of the Oliver Opera House which had opened on October 26, 1965. The Oliver Theatre opened in late-summer of 1909 with seating listed at 760. The Oliver Theatre was one of the smaller downtown theatres. At closing it was operated by Affiliated Theatres.

The theatre closed in 1953 and was later demolished. There is a Chase Bank where the theatre once stood.

The February 28, 1924, issue of The Film Daily ran a promotional ad for the movie The Hunchback of Notre Dame which included a letter from the operator of the Oliver Theatre:

“The Hunchback of Notre Dame has broken all house records established at the Oliver Theatre, South Bend, for the past fifteen years. Kindly call and see me as I would be interested in a second run of the Hunchback.”The Oliver Theatre must have been in operation before the end of 1909, as it was under construction in the middle of that year, according to an item in the July 10 issue of the Terre Haute Saturday Spectator. The item said that the new house was being built as part of an office building project that was on the site of the Oliver Opera House, which had opened in 1885. The Oliver family fortune came from the manufacture of chilled iron plows, an invention had been essential to the opening of the prairies to agriculture.

The Oliver Theatre was located on what is now the parking lot adjacent to the JMS (John M. Studebaker) Building. Page 28 of South Bend in Vintage Postcards has a photo of the Studebaker Building with the front of the Oliver Theatre down the block to the left (Google Books preview.)