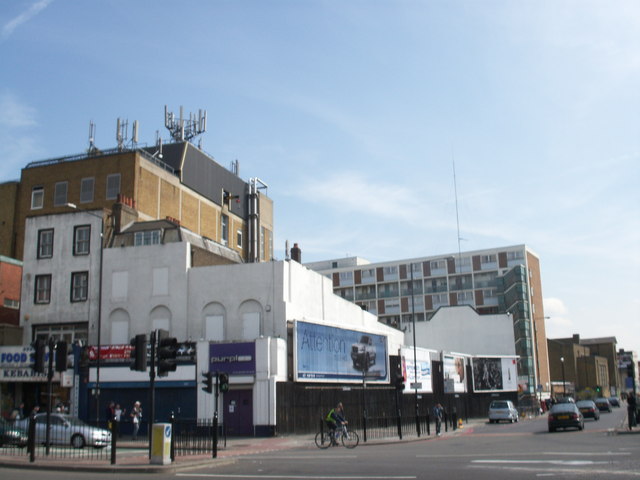 Located a few yards away from Mile End Underground (tube) Station on the corner of Mile End Road and Burdett Road, in the east London district of Mile End. The Electric Theatre was opened in 1910. It was designed by architects Saville & Martin and was operated by United Electric Theatres Ltd.

In 1918, it was re-named La Boheme Cinema, and had a banqueting suite and cafe attached in an adjoining building. By 1937, this had been converted into the adjacent dance hall/ballroom.

Taken over by Capitol & Provincial News Theatres Ltd. (later to become Classic Cinemas chain) the cinema was re-named Vogue Cinema in 1940. Architects Culpin & Bowers undertook some remodeling. It was badly damaged by German bombs in 1942 and its ruins were eventually removed in a road widening scheme of Burdett Road.

The former dance hall/ballroom remained untouched, and from the late-1970’s, through to the mid-1990’s operated as a gay disco named Benjys. It remains open today as a nightclub. At the rear of the building on Wentworth Mews, beneath the disco is a gay leather bar named Backstreet, which has been operating since the 1960’s.

All I remember was a bombsite the public toilets were located in the middle of the road and a few yards from the corner was a bombed out church we used to play there entering from the street behind. we found a dead cat there.

Is it really necessary to give a name and location of a gay club on here?