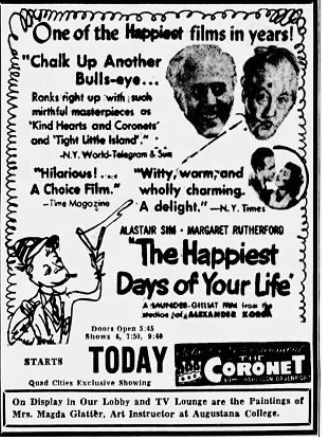 The Uptown Theatre opened on May 13, 1930 with Maurice Chevalier in “The Love Parade”. Seating was listed at 490. It was located on Harrison Street between 14th Street & 15th Street. Changed names to the Coronet Theatre on January 12, 1951. In 1965 it was remodeled to the plans of architect Tevis C. Freeman. In the 1970’s it went over to an adult movie program.

The Coronet Theatre closed in 1980 and has since been demolished. There is a vacant lot where the theatre once stood.

I remember the Coronet Theater before it went to adult films. It happened to grab on to the “Sound of Music” after the first run and showed that film for almost an entire year along with a few other films.

In Davenport City Directories of 1930 thru 1949 the theater at 1411-13 Harrison is listed as the Uptown. In directories of 1951 thru 1984 it is listed as the Coronet. Julius Geertz, the king of Davenport neighborhood theaters, owned the Uptown. In March of 1951 Mr. Geertz sold the Uptown to Ernie Pannos and his associates, chief of whom was Jim Stopulos. Mr Stopulos made this theater locally famous as a venue for foreign films, but he also screened Hollywood features and his big triumph was his 62-week run of The Sound of Music. When I was a boy I went to the Coronet to see films like the Brit comedy The Baby and the Battleship, the Disney nature documentary Jungle Cat, the Three Stooges compilation film Stop! Look! and Laugh! hosted by Paul Winchell, the Brit horror film Village of the Damned, and many more. Thank you, Jim!

This opened as coronet on January 12th, 1951. Grand opening ad in photo section.

Moline architect Tevis C. Freeman was the architect who helped the Coronet Theatre’s remodel under James Stopulous that occurred between the Beatles' “Help” in 1965 and the theater’s historic run of “Sound of Music.” The Quad Cities longest-running film was “Sound of Music” running 73 weeks from November 10, 1965 to April 11, 1967. When “Dr. Zhivago” replaced “Sound of Music,” it played 25 weeks.