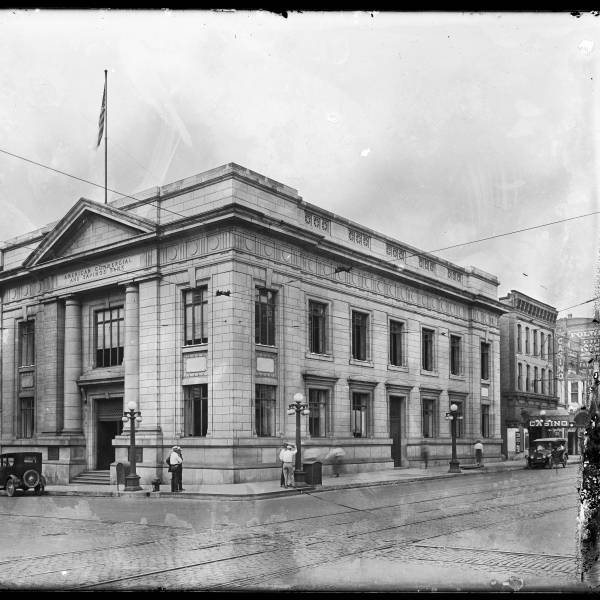 The Casino Theatre was located in downtown at W. 3rd Street & Main Street and opened in 1914. Seating was listed at 540.

The theatre has been demolished and a Wells Fargo Bank stands on the site.

The December 13, 1913, issue of trade journal The Moving Picture World said that an existing building at 213 W. Third Street would be remodeled for use as a moving picture theater to be called the Casino. The local firm of Clausen & Clausen (Frederick G. and Rudolph J., a father and son partnership) were preparing the plans for the project.

Davenport City Directories from 1914 thru 1921 list the Casino at 213 W. 3rd Street, sandwiched between the German Savings Bank (later the American Commercial and Savings Bank) and the Family theater. The Casino is the first Davenport theater I know of that was operated by Abe Blank who arguably would be the most important exhibitor in the city’s history. Blank promoted his theater heavily in the Daily Times newspaper to the extent that there was a noticeable drop in live theatrical news in the Times after the Casino opened, and a corresponding increase in movie news in the paper’s entertainment pages.

The Casino Theatre launched December 31, 1913 as an A.H. Blank Theatre pre-Paramount days. On December 20, 1921, fire gutted the building ending its run as a theatre. The building was retrofitted for a Smith Cafeteria which opened in April of 1922.