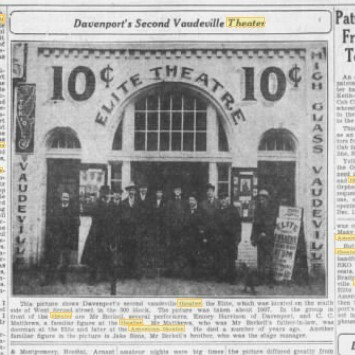 The Elite Theatre was a small downtown house located on W. 2nd Street at N. Harrison Street. It was opened September 2, 1906 and seating for the theatre was listed at 302. In 1907 it was briefly renamed Tokio Theatre. It reopened on December 27, 1907, renamed Elite Theatre again and was operated by I. Dukes.

The Elite Theatre was closed March 30, 1915 and was converted into retail use. The building has been demolished and high rise office building is in its place.

The Elite is listed in the Davenport City Directories of 1907 through 1915 at 309-11 W. 2nd. This was a vaudeville house and film theater that opened circa 1904 and in the fall of that year they screened the historic early film The Great Train Robbery.

The Elite Theatre launched on August 6, 1904 in a converted retail spot by the Shirley Amusement Group. at 322 Brady. The theatre announces a move in the summer of 1906 possibly due to ventilation issues using tent shows after closing its Brady location until moving to its new location.

On September 2, 1906, the theatre moved to this location of 309-311 W. 2d Street ceasing its short-term practice of tent shows. According to another CT member, the theatre has a brief name change to the Tokio Theatre during 1907. It closes for a brief remodel (and apparent name change).

On December 27, 1907, the theatre gets new seating and reopens as the Elite Theatre. The Elite Theatre appears to have gone out of business after showings on March 30, 1915. The spot is converted to retail and becomes a Piggly Wiggly grocery store.