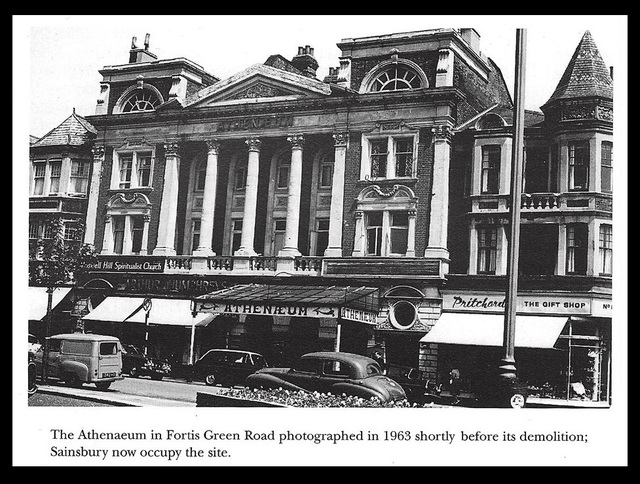 Located in the north London district of Muswell Hill. Built in 1900, on Fortis Green Road at the corner of Athenaeum Place, directly opposite where today the Odeon Muswell Hill is located. The Athenaeum was built by James Edmondson for multi-purpose use. It was an impressive building that had five Doric Columns which supported a pediment, that was flanked on each side by a tower feature.

Inside were two halls, seating 486 and 200. Films were a regular attraction in the early days. The Athenaeum Picture Playhouse was operating in the 486-seat auditorium with a balcony from November 23, 1918 with William Farnum in “The Conqueror”. In June 1930 architect George Hastings made alteration which included the installation of sound equipment. Home Counties Theatres Ltd. were the operators when the Athenaeum Picture Playhouse closed on November 14, 1936 with Shirley Temple in “Captain January” & Jed Prouty in “Every Saturday Night”. On 31st January 1936 it opened as the Palais de Dance. It was also used as the Muswell Hill Synagogue from the 1920’s until 1963.

It was demolished in 1966, and a supermarket was built on the site, today operated by Sainsburys.